Climate change on my mind… 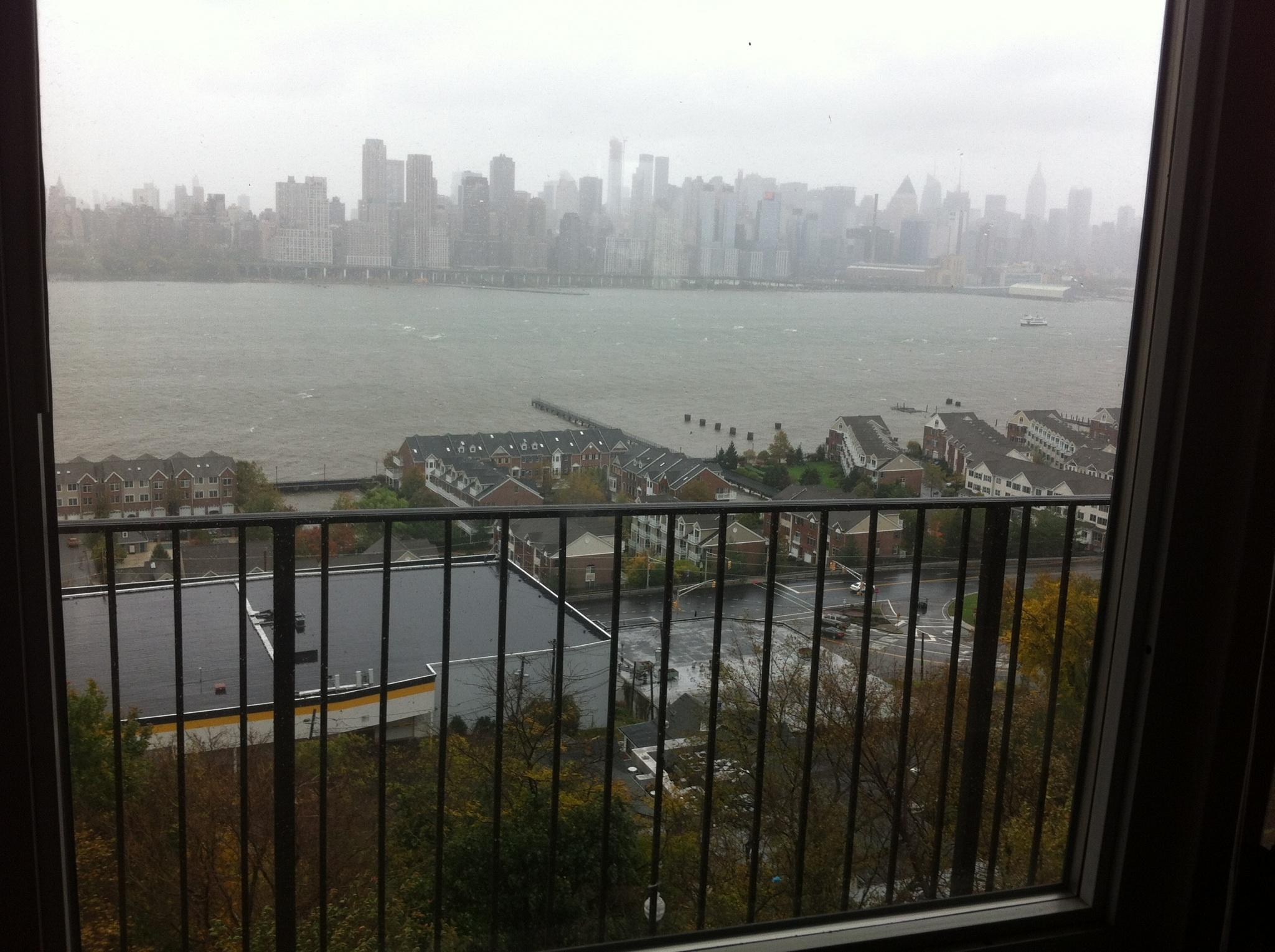 NYC After Sandy–Looks More Intact Than It Is

Do we call preoccupation with the over-arching issue of the day–the one that may well send humanity back to the middle-ages in a conflict over resources–do we call that obsession?  Is it unhealthy?  Is there an OCD component?  Read this, and make up your own mind…

I found Hurricane Sandy to be deeply upsetting.  My daughter lives in Brooklyn, the “high part” she tells me.  She waited out the storm in her boyfriend’s apartment five minutes from Hoboken NJ (decimated, as CNN informed us every two minutes), and they never even lost electricity.  It took four days for her to get back to her own place, but she is fine.

The climate, however, is not fine.  And climate is crucial to human beings, as it turns out.  As we have known forever.

My view of the weather had already been affected by my knowledge of the problem.  Remember how it started decades ago, with the “greenhouse effect?”

Oy vey, the litany in my brain about the weather!  Is there enough rain in Northern California this season, or too much?  It’s been so chilly on the coast the last two summers, but isn’t that because unprecedented heat inland sucks the fog in more?  It’s so hot today!  Is it because I’m getting old, and my body hates anything not in the middle?  It’s so cold today!  Shouldn’t I be happy about that?   On and on.

But now the weather begins to seem downright malevolent.  Right before Sandy my husband and I traveled to Vermont for the fall leaves, which were beautiful amidst extensive damage, still there and very evident, from Irene.  We’ve been in Colorado under a haze of wildfire smoke for days at a time.  I sure listen up when the meteorologists say there is a flood watch right here in the Bay Area for the next five days.

After Sandy my depression deepened about that trite fear—what kind of world will we be handing to our children and grandchildren?  And I felt angry.  At the deniers.  At the fossil fuel companies who rake in unprecedented profits from the most profitable industry in the history of the world.  At the number of SUV’s still on every road.  At PG& E,  which sends regular graphs to inform me that despite the measures I’ve  imposed on my family, my house is a much heavier user of energy than others its size.  Grrr.

But in my impending old age I’ve discovered that actually, I don’t like to be angry.  I have a little Buddhist daily practice after all, and anger no longer seems a route toward improvement.  Of anything.

So finally I came up with a compassionate thought about humanity.  We have created this problem because nature is so fearsome to begin with.  We have invented light against darkness, heat against the cold, transportation to counteract isolation.  And now we have to figure out what to do with the consequences.

And another realization?  This problem is so huge that I can take it off my individual shoulders.  Whatever any one person–or even one country–does will not be enough .  Even Bill McKibben’s plan to disinvest from all fossil fuels has been characterized recently in a comment on this blog as insufficient.

So why not ignore it?  After all, I will be gone from this planet soon enough.  But everything is interconnected, and for me , that way lies more suffering.  So I resolved to do something every single day, however insignificant, to combat climate change.  Here is the result, eleven days later:

November 20:  E-mailed financial advisor about how not to purchase fossil fuel stock ever again, and how to divest it of all such holdings from the past, within five years (or is it three that McKibben is asking on his Do the Math Tour?).

November 21:  Walked to the store instead of driving.  (Walking is so pleasurable, so healthy—does this count?  Yes!).  Enumerated the fluorescent bulbs in the house, and congratulated myself.  Promised myself to use only LED’s for holiday lighting.  Wondered how to use LED’s for regular lighting.  Worried about the damned PG& E graph.  Later in the day, drove my Prius set at 55 mph for maximum fuel efficiency.  Came up with a Buddhist vision of the millions of actions, on the part of every individual, company and government in the world, that it’s going to take to cut back significantly on emissions.

November 22:   Offered a Thanksgiving toast about climate change.  Incorporated compassion for the human race as to how we got here, notion of the millions of changes it will take, knowledge that not up to any one of us but rather to us all, and got applause!  (Compassion plus determination = applause?  Is this significant??)

Promised a family member  to copy, duplex, Naomi Klein’s article, “Capitalism vs. The Climate,” from the The 350 Reader.  She was impressed with the promise of duplex—two-sided, so no paper wasted—as one of the gazillion choices which affects the issue.

November 24:  Walked with my husband to the movies instead of driving.  (See how boring this list can get? )

November 25:  Walked nowhere.  Left heat on in entire house when no one home, by accident.  Bad Person?  No.  Bad Day for my little bit on climate change?  Yes!

November 26:  Walked to restaurant  instead of driving.  Not even a chore.  Need to do more.

November 27:  Walked somewhere or other, can’t remember now, and thought about all this again.  Carried a cloth bag, and remembered that plastic bags require petroleum to produce.  (I am super careful with plastic bags, and still, they proliferate.  Outlaw plastic bags!)  But plastic is everywhere, and I use it and discard some every single day.  What is the answer to this?

Decided it is a good idea not to eat mammals.  Not only are their eyes related to ours, but the amount of feed used to raise them increases emissions, clears the rain forest, and lessens amount of other food available for humans.  Not sure I will completely stop, though.  Do I have the will?  Is it important enough to me?

Thought about the NYT Opinion section last Sunday.  Did not like the lead article—about how all civilizations are finite, and come to an end.  About how daunting nature is. The writer did not wrestle with the obscenity of unbridled greed and profit; said nothing about what we can do to change this, and how it is a matter of will.  Was scared by another article—a series of maps that indicated how much of our cities would be lost with three different scenarios of the rise of the oceans.  Because rise there will be, already is.  It’s now a question of how much.

One very cool realization in the mist of all this angst—EVERY thing I can think of that is good for the environment also impacts climate change in the right direction.  It is as if the Universe has designed a massive riddle for us.   Plenitude of issues.  Technological fixes in sight.   How to match fix to issue, how to get it done?   A jigsaw puzzle.   Interlocking pieces, that fit to create the big picture.  A labyrinth.  Very difficult to find our way through.

November 28:  Signed up with SolarCity for a free consultation on rooftop solar panels.  Turns out you can either pay up front, or pay  SolarCity for the electricity they generate.  Also signed up for an energy audit of the house.  This requires going on line to get data from PG&E (ugh—bound to take up time), and will cost $299.  Unless, of course, they find the problem remediable and we pay SolarCity to remedy it, at which point they will waive the fee.  Moneymoneymoney—is there anything else that takes up so much time in our society?  Is there anything more worth paying for than a bit of mitigation of climate change?

November 29:  Walked for pleasure and coffee.  Attended Kehilla Synagogue’s Green Committee meeting re the Oakland Climate Action Coalition, which seeks to get Oakland to sign onto program to give ratepayers choice of more renewable energy, and benefits community with new local jobs.

← The Beauty of Wild Places …
→ Seventeen Books For and About the Mature Woman
Copyright © 2014–2018 Barbara Rhine.
Go Top