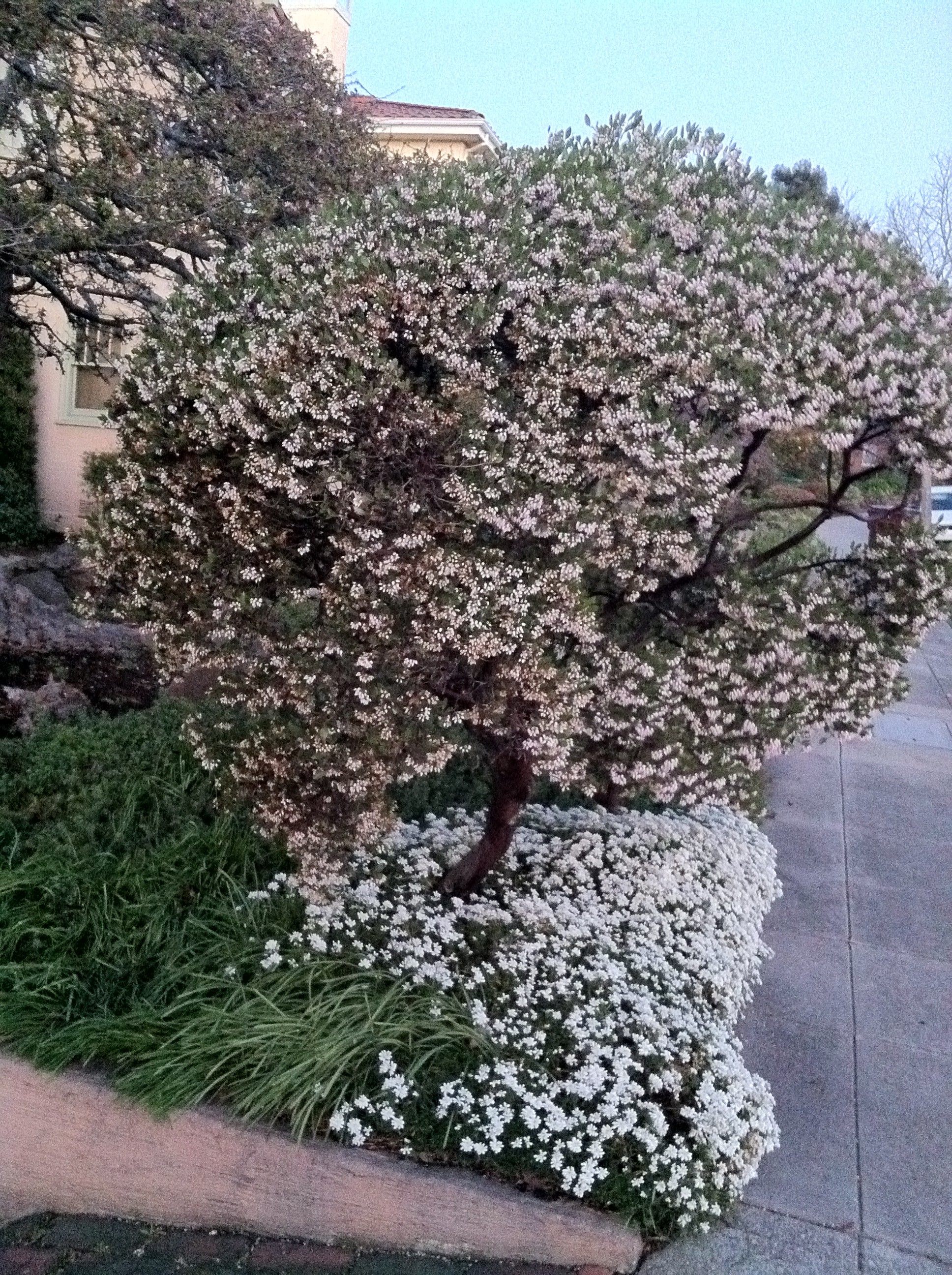 I WAS AT THE LARGEST CLIMATE CHANGE DEMO IN HISTORY, THE WEATHER ISSUE ROILING ABOUT IN MY MIND…

I know, I get it—we no longer call it global warming,  let alone the old phrase “greenhouse effect.”  It has become–with broad scientific consensus–Climate Change.  Droughts, wildfires, huge storms, more snow (but less snow-pack), and the hottest year ever, in 2012.

But still—the paradox.  While tens of thousands gathered at the Washington Monument to listen to the program, admire the signs, circle the White House, we had to jump in place just to keep from freezing!

But first the prelude…

Knowledge of climate change can result in a deep black hole of oily depression.  Confinement to a dry, burnt landscape.  A lurch into the tornado’s scary black funnel.  A nightmare of monstrous waves whipped by the wind.  In other words, you can become unbalanced. 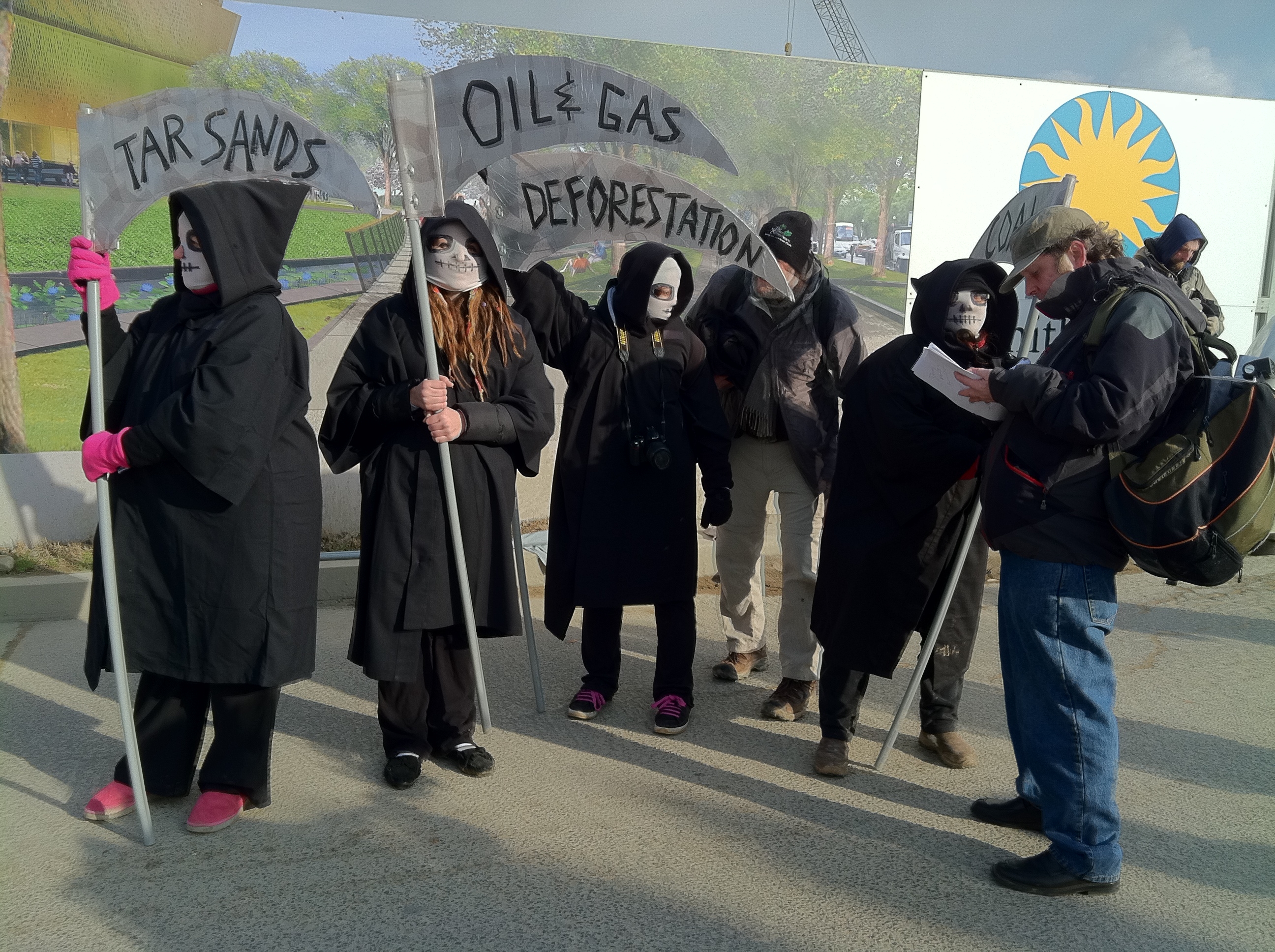 The antidote, I tell myself, is mass action with like-minded people.  I ponder whether to go all the way from Oakland to DC.  A friend exhorts me not be responsible for emissions from the plane trip. (One round-trip flight from New York  to San Francisco creates a warming effect equivalent to 2 or 3 tons of carbon dioxide per person!)  Another friend’s rationale is that the flight will occur whether I am on it or not.  Yet shouldn’t we organize, all of us, to take fewer flights?  I have not seen that action item on any agenda, though, and I do fly for vacations.  How ironic if my conscience checked in now and eliminated this particular trip.

So I board the plane wearing a bright orange 350.Org t-shirt that says “We>Fossil Fuels” on the front, and has a smoke stack plus $$=the earth on fire (in pictures) on the back.   A stranger in the aisle seat informs me that he drives an electric car with the vanity plate “350ppm.  This leads to a detailed verbal exchange.  The young woman in the middle seat smiles politely throughout, and says nothing. 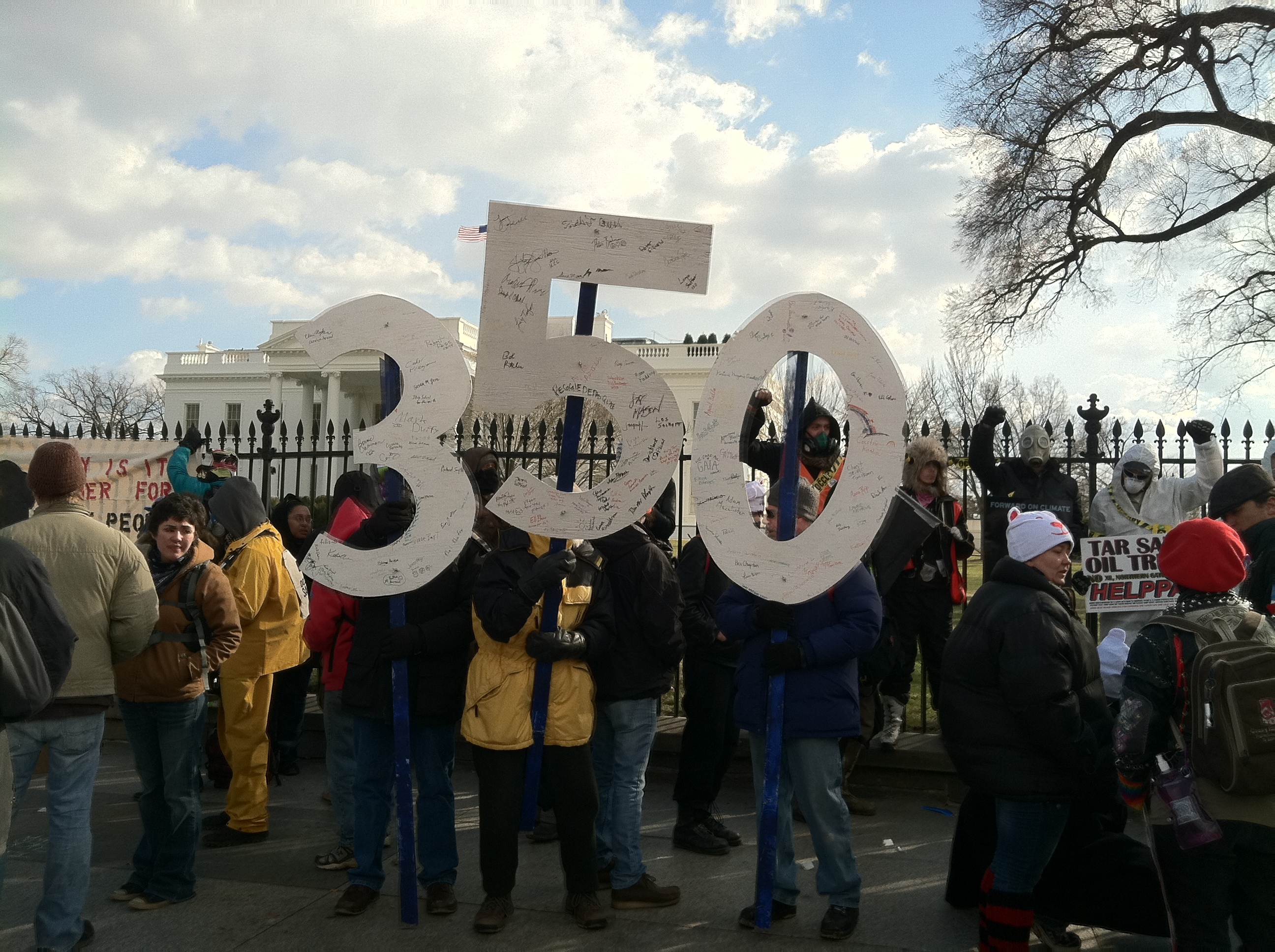 Upon arrival I check my e-mail, only to find a letter from350.Org’s leader  Bill McKibben.    He tells me that the march planned in SF is at least as important as the one in DC.  I choose not to believe him.  I spend a cold day touring DC’s free art museums.  Go see Ai Weiwei at the Hirshhorn if you get the chance.

Sunday morning I head to the National Resources Defense Council (NRDC) office for brunch.  Light bright spaces, overlooking a rooftop landscape.  Pastries, bagels and cream cheese, strong hot coffee.  Carrots and nuts that I wrap in napkins for later.  All those years of giving money pay off… 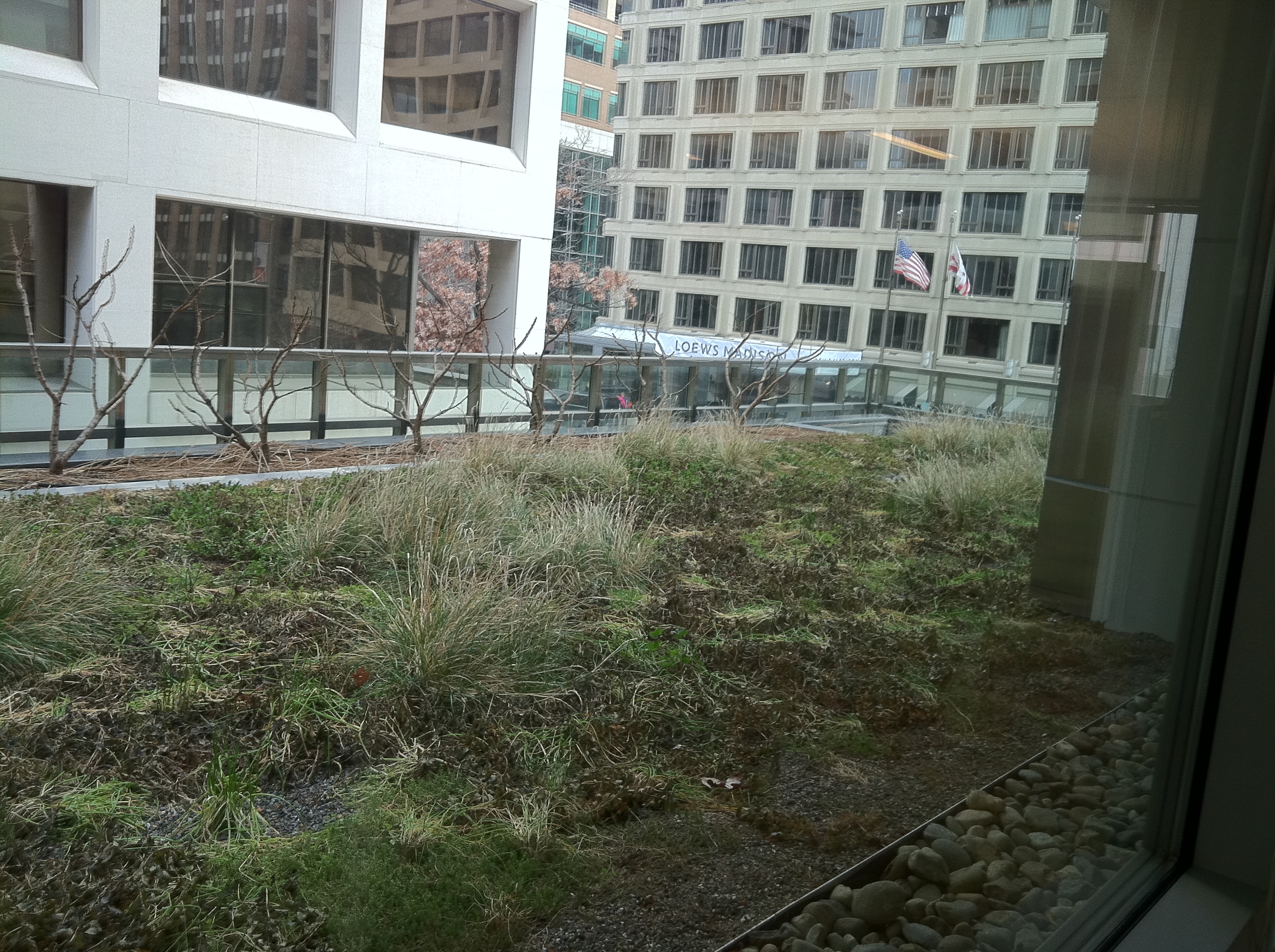 Fortified, I set off for the Washington Monument with the others.

Where is the President, by the way, while we are marching down the street toward his house?   Playing golf in Florida.  With Tiger Woods.  And oil executives.   Now, to be fair, as Jon Stewart would say, maybe Barack and Tiger and the Texas oil guys were all worried together that during their grand-children’s lifetime the planet will no longer support the human species…Could be, right??  Haha.

An unnamed source (after all, this is DC), who goes to White House meetings all the time, assures me that protestors at the august abode drive the President’s staff crazy!  Why?  Apparently we are supposed to trust Mr. Obama, and not make him look bad.  Ah, but Barack—why not see that we have got your back, so you can Do The Right Thing?

The rally gets under way.  Reverend Lennox Yearwood from the Hip Hop caucus is the  MC.  He tells us that the issue today is even more important than those that led Martin Luther King to speak in this same place fifty years ago. 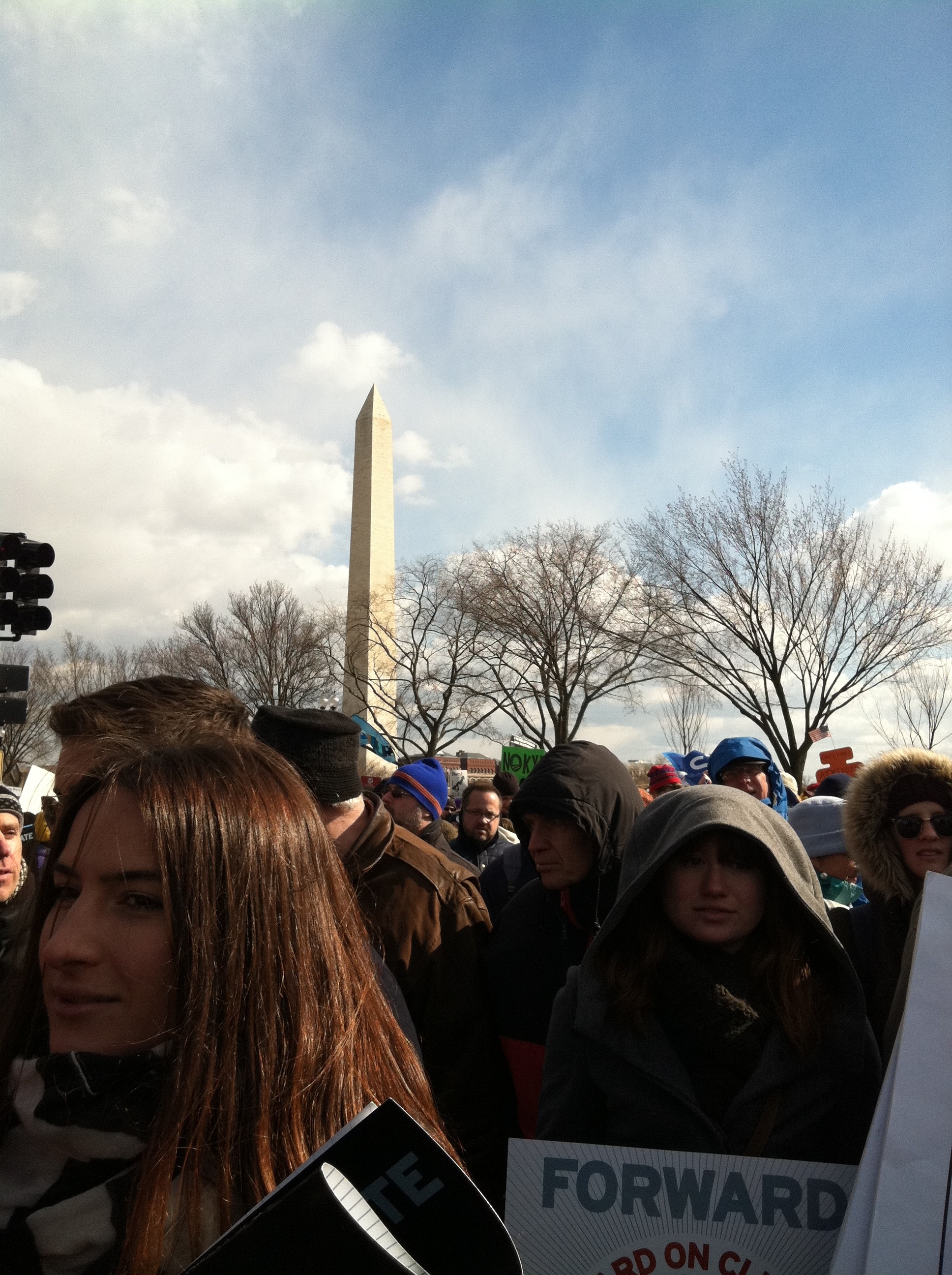 Van Jones, former White House “green czar,” characterizes this time for Presidential action as “the last play in the last quarter of the game,” and exhorts the President to realize that the Tar Sands decision is the most important he will ever make.

What’s so bad about the Tar Sands Pipeline anyhow?  After all, we have 55,000 miles of oil pipeline crisscrossing the United States, and no problema, right?   Like the one buried in the Yellowstone River, which when it broke, fouled 70 miles of the scenic bank, killing fish and wildlife and prompting a massive, months-long cleanup.   Haha.

So what if the Keystone Pipeline would be the longest in the U.S. ever, longer than the Trans Alaska Pipeline, which stretches 800 miles?  After all, the Canadian Association of Petroleum Producers (CAPP) assures us that Canada is responsible for only 2% of the world’s emissions, and that the technology of getting oil from sand is becoming cleaner by the minute.   (Beware, though–the disclaimer warns that the reader cannot hold CAPP liable for the accuracy of any of this).  Plus, CAPP adds, most greenhouse gas emissions are produced by auto exhaust.  Maybe if we all blame someone somewhere else for the problem, the climate won’t change?  Besides, isn’t auto exhaust related to oil which is used for gasoline which fuels cars?

It turns out that squeezing oil out of sand is extremely wasteful.  To produce a single barrel of oil requires 2-4 tons of sand and 2-4 barrels of water.  Enormous shovels carve out open pits in the tar sands and scoop out the greasy interior, which is hauled away to a processing facility.  There, the stuff is combined with water to form a slurry, which forces the sand to sink to the bottom while the bitumen floats to the top. Once the bitumen is extracted, the run-off is piped into large, stagnant tailing ponds of sand, water, and bitumen impurities.  To make it to the pump, this purified bitumen heads to an oil refinery. And since bitumen is a highly viscous “heavy” oil that doesn’t flow as easily as lighter crude, it requires more processing to facilitate its flow through those long miles of pipeline.

This is why NASA scientist and climate expert James Hansen says that if the government approves the project, it’s “game over” for curbing climate change. 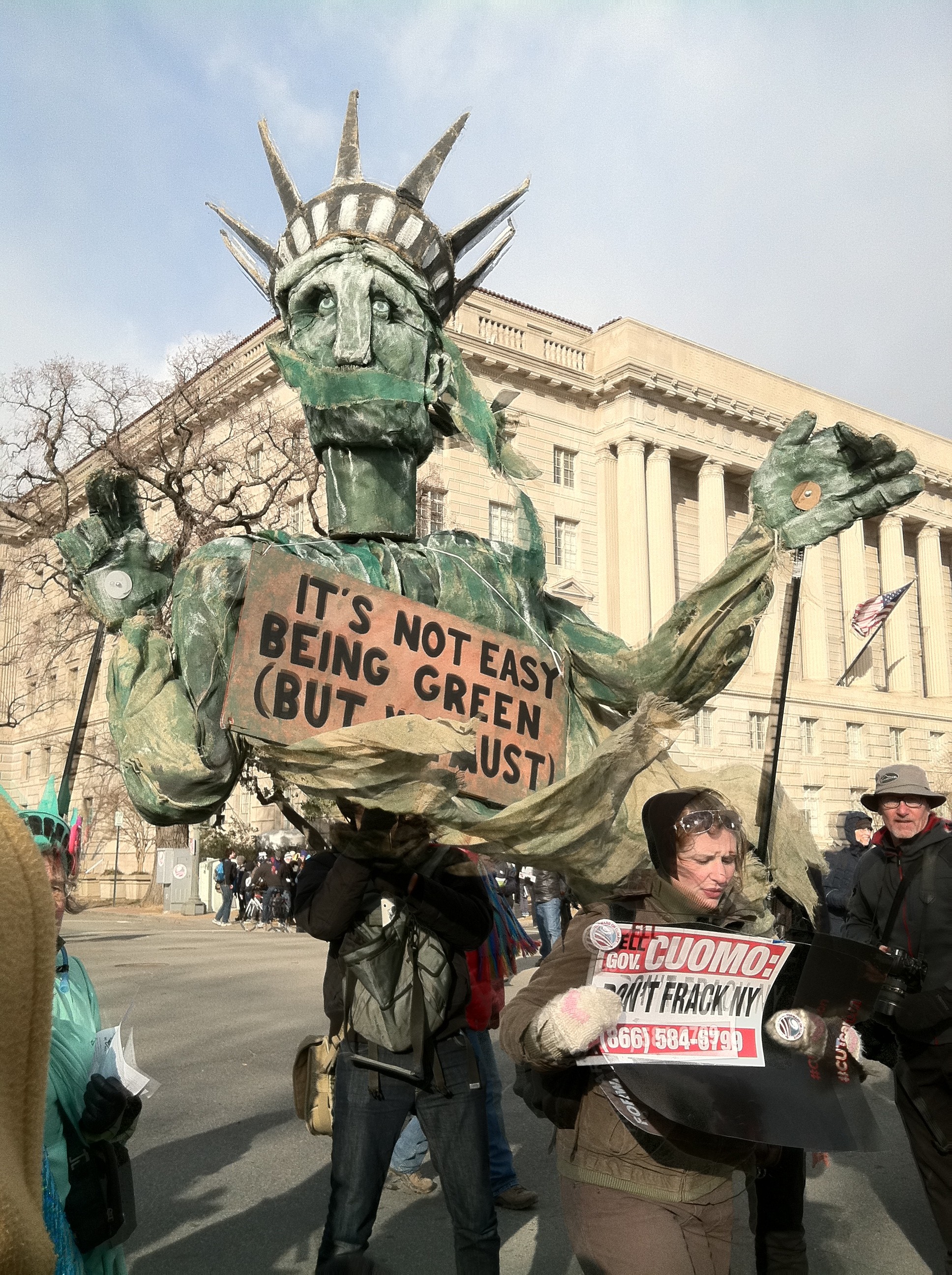 Not Easy Being Green–But We Must!

Okay now, before you get discouraged?

Back at the rally, Bill McKibben informs us that students from 256 colleges have signed on to campaign for their schools to divest from oil.  He exhorts us to mark off the days at the end of July, typically the hottest of  the year, and set aside bail money.  (As I write this, I have just  entered “direct action on climate change,” every day from July 27 to July 31.)

An investment banker says that oil is now a bad investment.

Michael  Brune, Executive Director of the Sierra Club, assures us that “the spell of oil has been broken.”

A Vermont Senator named WhiteHouse, of all things,  lends official support to all this.

Jackie Thomas, First Nation Chief of the Saik’uz in Canada, reminds us:

“Oil will spill; it’s just a matter of when.”

She continues:   “I need your help as the bulldozers come.  I am laying down my life.”

Chief Thomas also says “never in my life have I seen white and native work together, until now,”  mentions something called the Cowboy-Indian Alliance, and leads us in an approving chant of “CIA!  CIA!”   (Well, I never!) 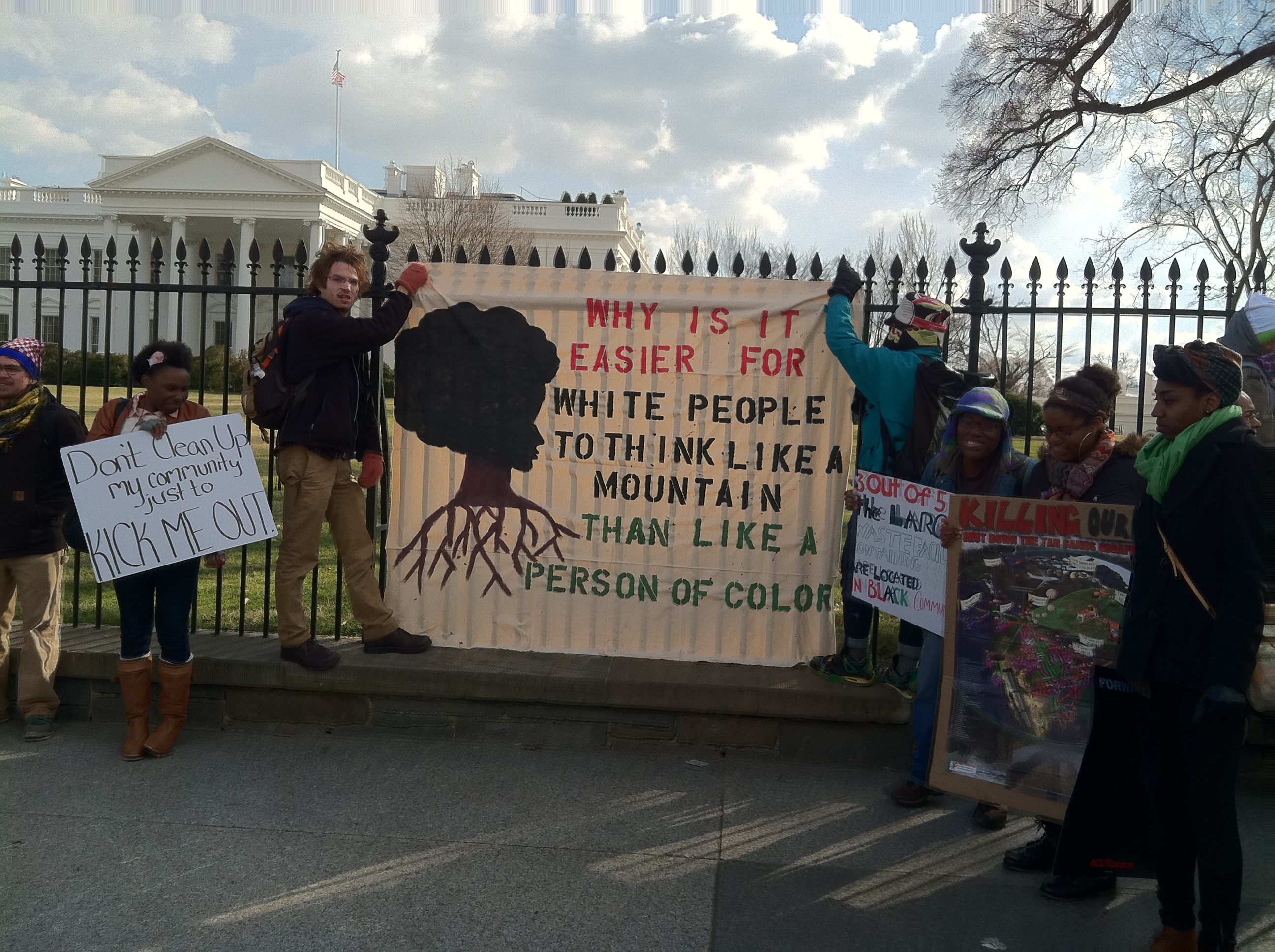 We Must All Unite Somehow

And we–half  to two-thirds young people, Barbara Rhine estimates–set off  with our “Forward on Climate Change” posters, to circle the White House. 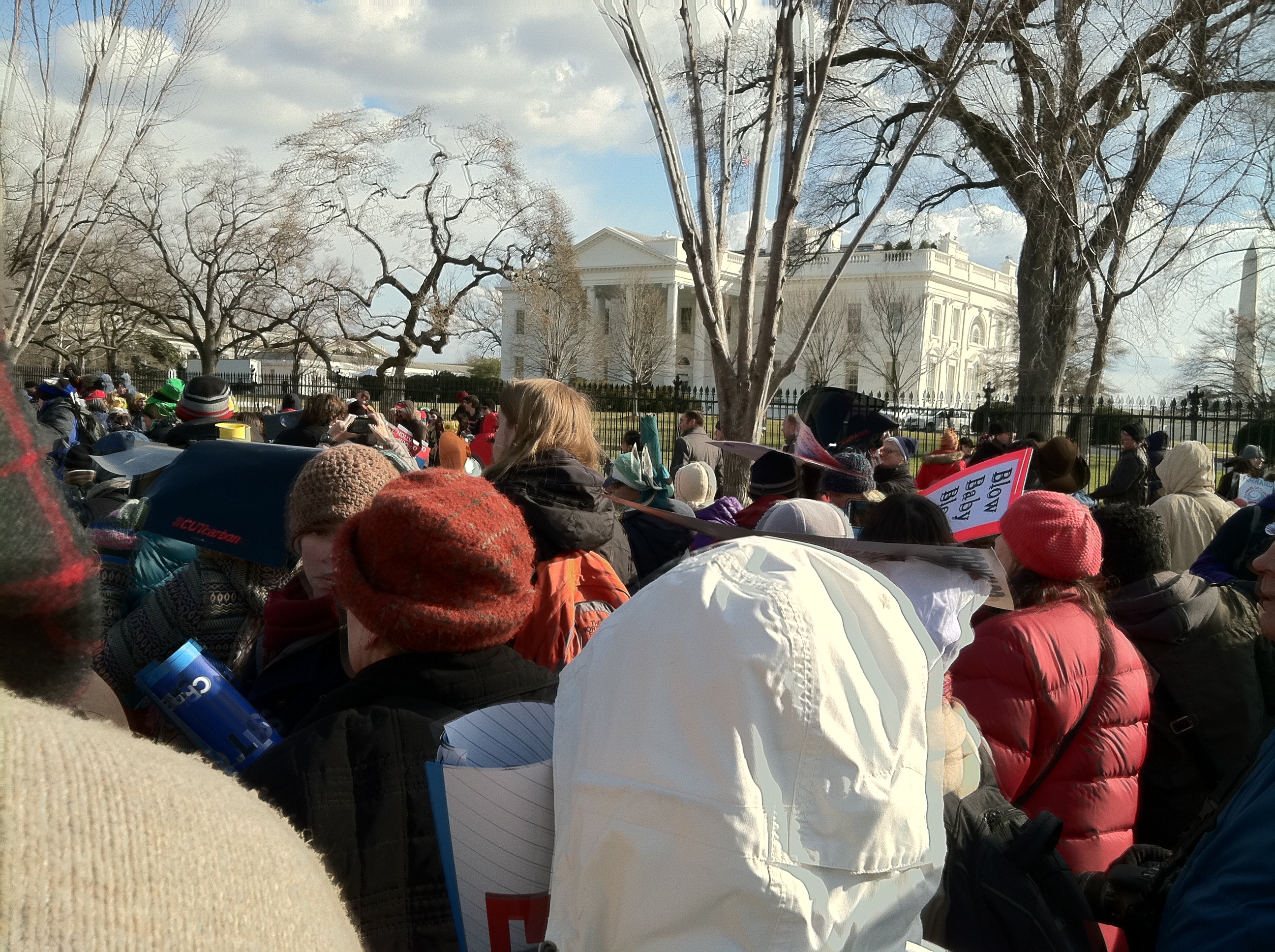 We Are Here, Mr. President!

“We are unstoppable; another world is possible!”

“Drilling oil by the hour.  What do we do?  Fight the power!”

Is it the cold, or are there tears in my eyes, as we all pledge and swear and yell and scream—to make a difference?

And we do circle that White House.  We take our pictures.  We return to the Washington Monument.  Washington’s finest clear the street behind us so we can’t turn around. 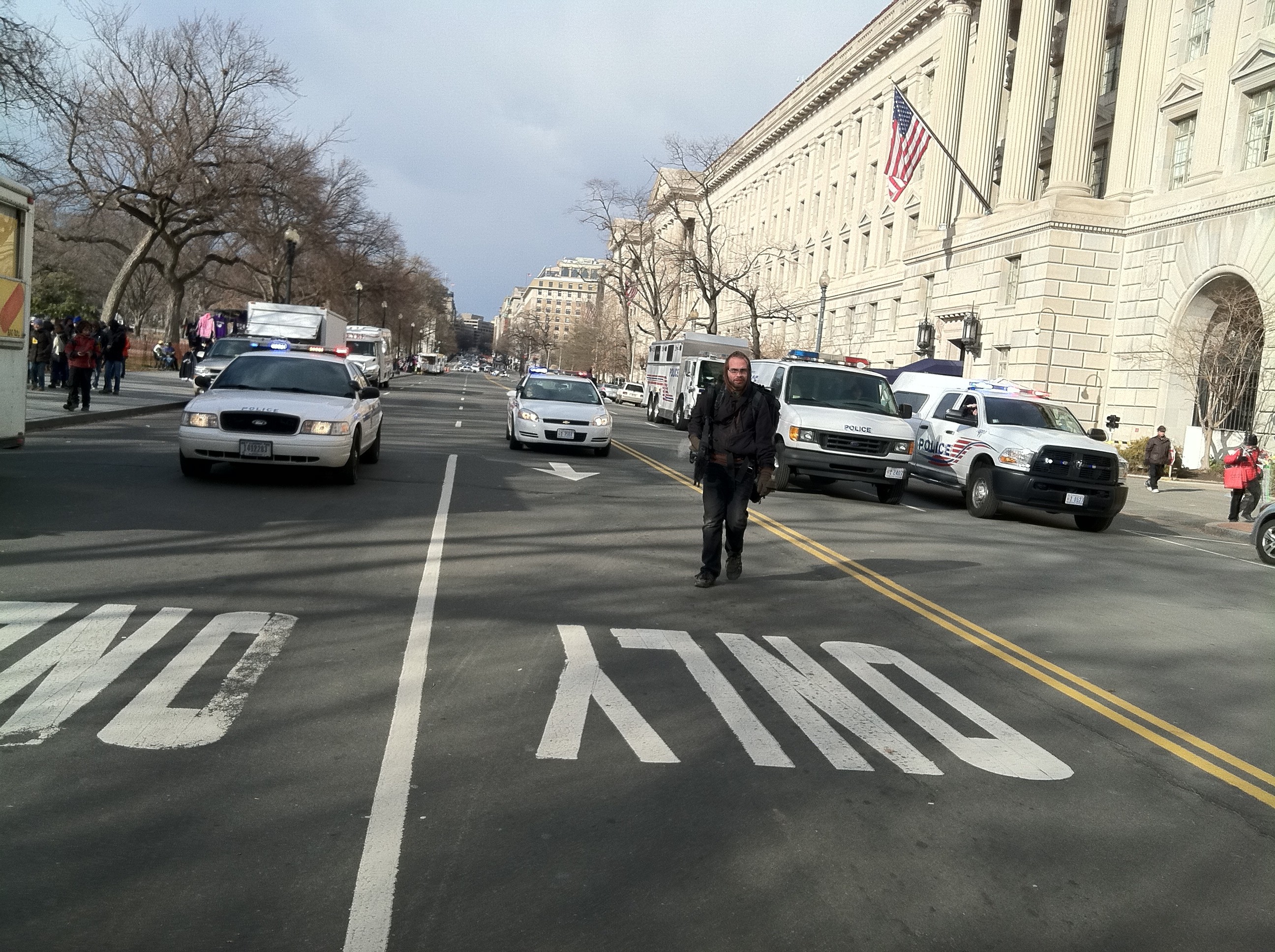 We Are Not Welcome Back

Back at the Monument, people beat drums. 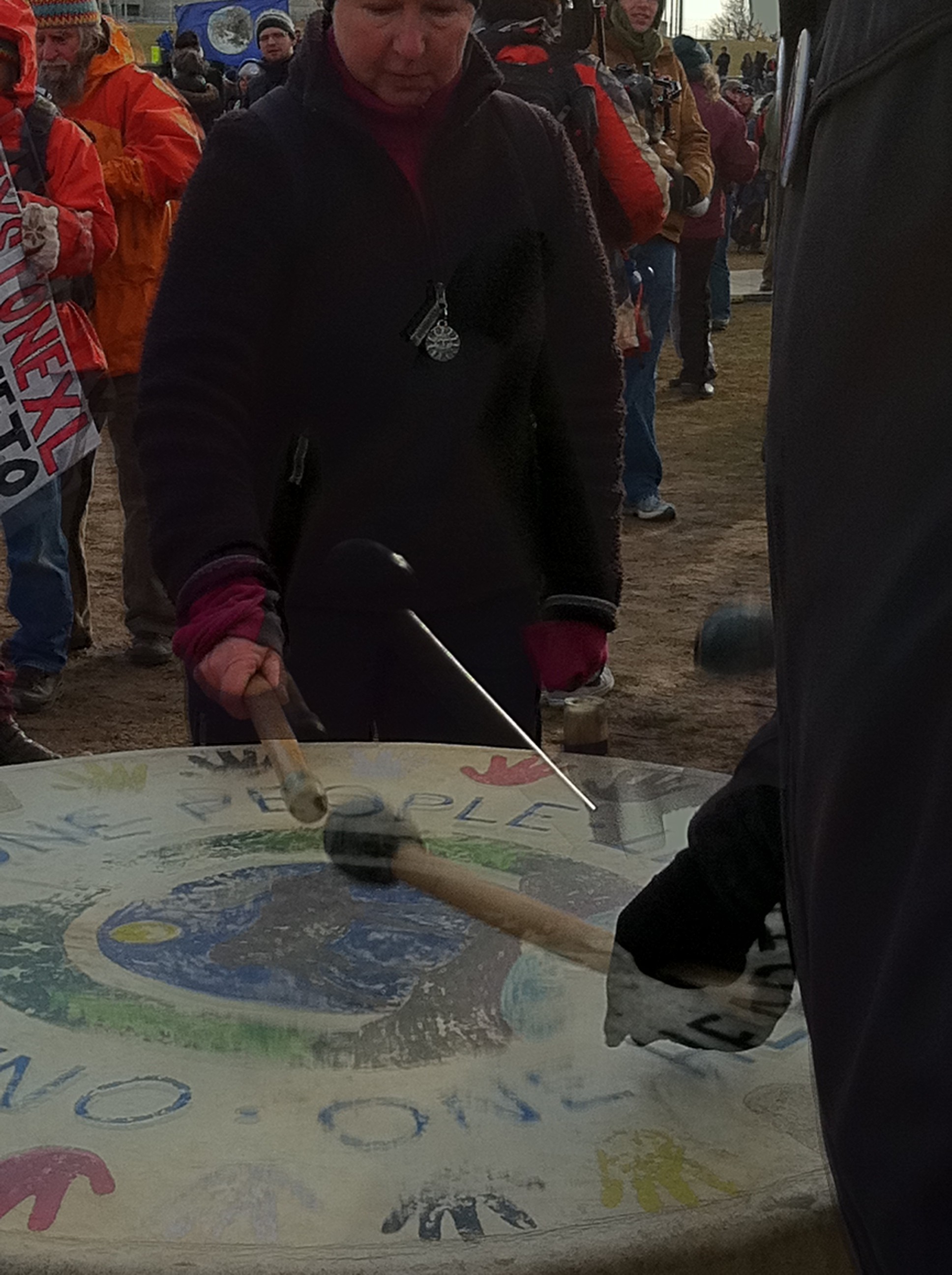 The kids dance some more.  Eventually I return to the hotel after all this, and take a hot bath.

So.  Contemplation of climate change is a kaleidoscope.  Or maybe one of those carnival rides that straps you in and spins you until you get sick.

On the up side:

Big Oil has noticed.  Big Oil is worried?  NBC reports that Big Oil took a poll and 69% of the American people support Tar Sands.  I wonder how they asked the question?  Oh, right.  They presented arguments for the pipeline and none against.  Another poll showed 60% of British Columbians oppose a Canadian tar sands pipeline.  Pick your poll.  Or do you even need a poll?  Will the climate obey the popular vote?

On the down side:  The arctic ice caps are melting, the oceans are rising, the seas are becoming acidified.  The scientists tell us it is all happening faster than the predictions.  There will be, or already has been, a tipping point.  There is already no way any time soon to get the earth back to the way it was before we came along with our emissions. 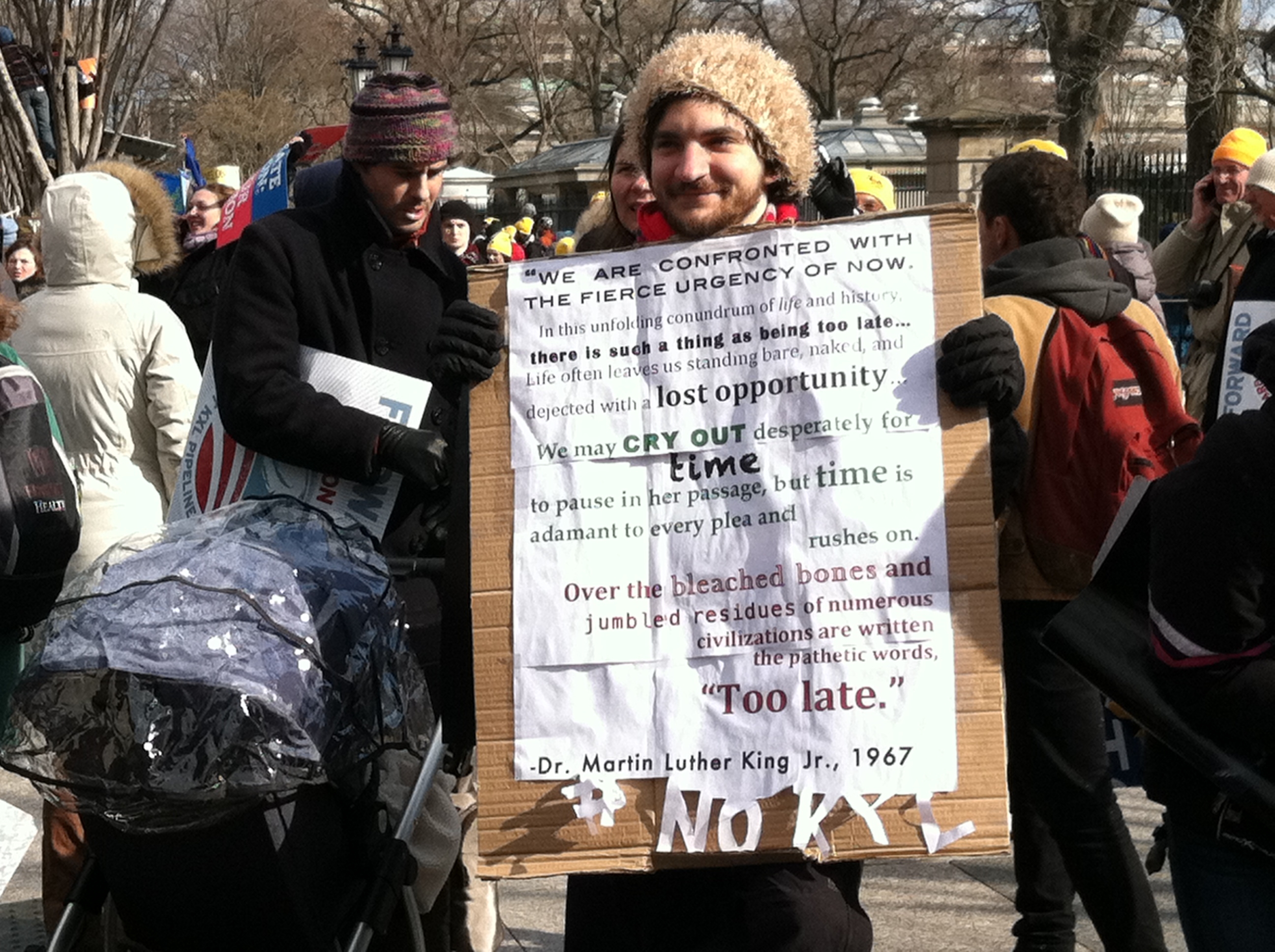 Time Is Running Out

Up Side:  Everybody who is courageous enough to face facts knows A LOT needs to be done.

My “Forward on Climate Change; Adelante por el Clima” button causes a flight attendant on the way back to inquire, and before we are done she tells me that she has landed in Baltimore during the winter and needed no coat.  She gives me her e-mail so she can “take action” with the Union of Concerned Scientists.

“And one person can make a difference,” she asks me, “right?”

“Right” is what I must believe.

Down side:  the New Yorker article re how Staten Island fares in Sandy’s wake.  Devastation.  Scary.  The future for all of us?

Up side:  the cab driver to the NRDC brunch wants leaflets for the back pocket so all his fares will read them.

The young hotel waiter’s face lights up when I tell him why I am here.  He grins and informs me that he studies environmental issues at City College when he’s through with his morning shift 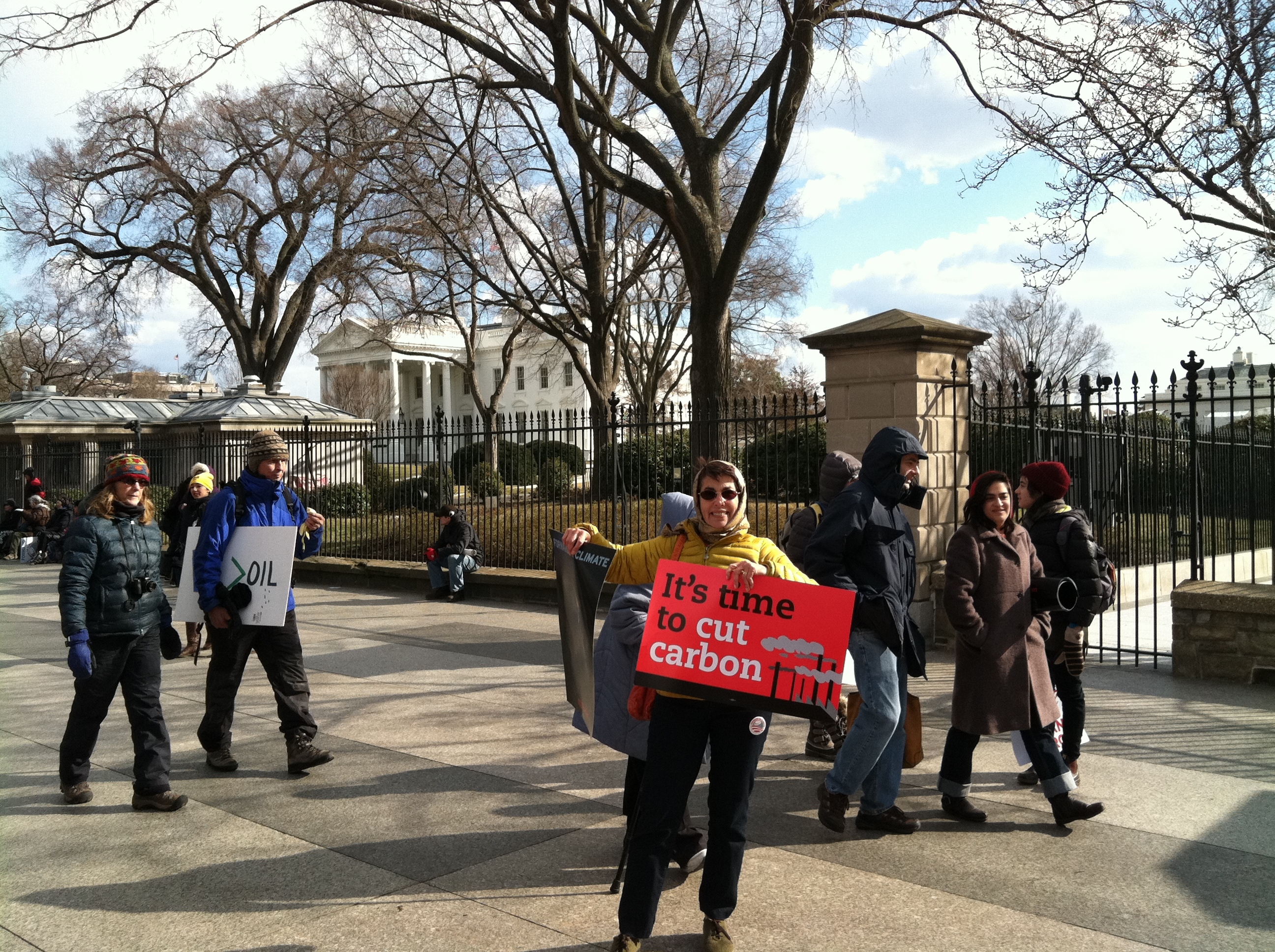 Barbara Rhine Was There!

My daughter texts me:  “Oh good!!!!  So glad ur there representing all of us!   Shout extra loud for me…Tell them Marina (17 months) and Alexa (due in April) need a healthy planet!!!!”

I start to cry every time I remember this message.

Ah, yes.  I forgot the metaphor of the emotional roller coaster.  That too. 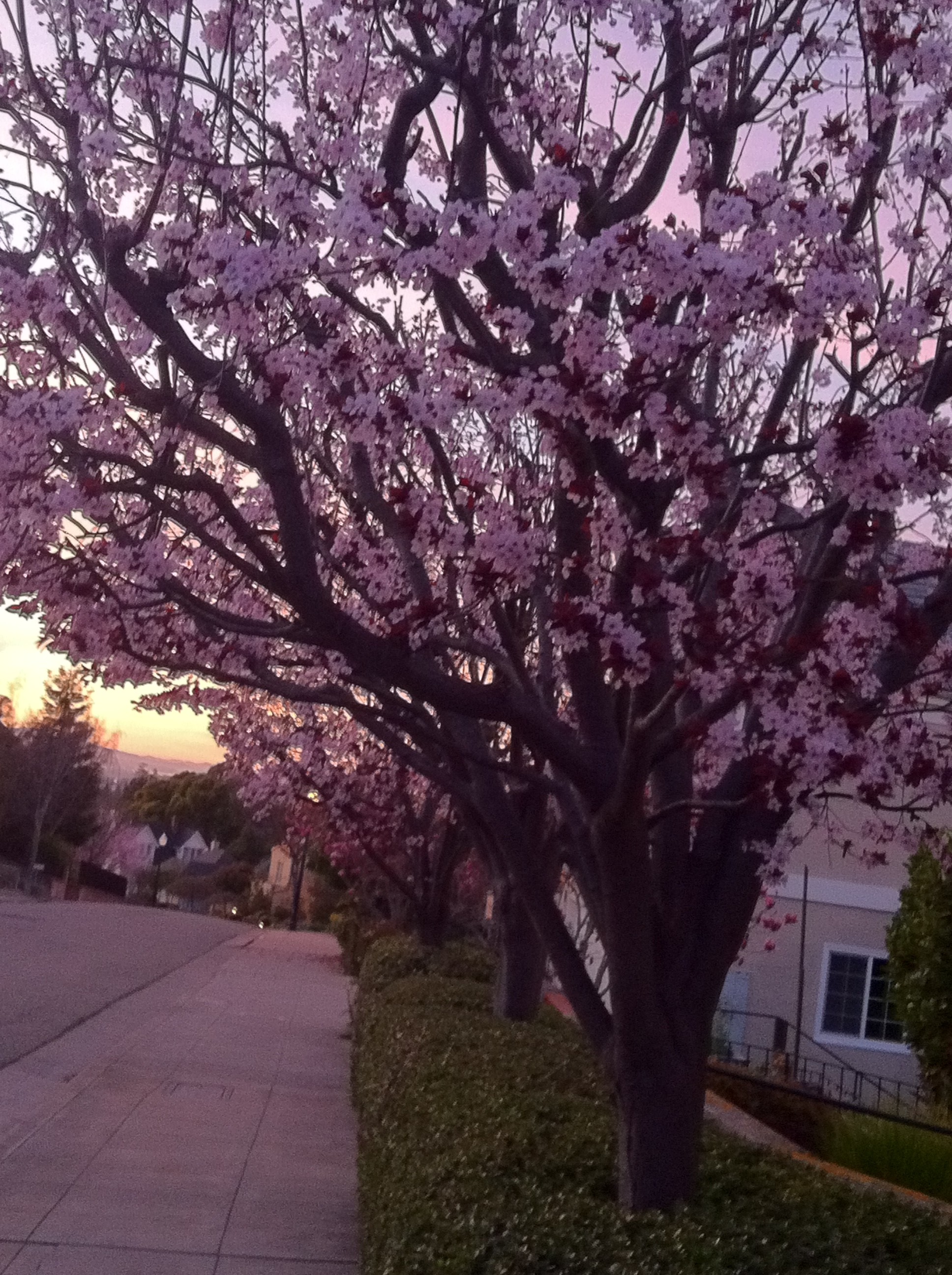