Haiti in Fiction and Fact

This from Che, of course:

“At the risk of seeming ridiculous, let me say that the true revolutionary is guided by a great feeling of love.”

Ben Fountain does not even mention the famous quote in his wonderful short-story collection, Brief Encounters with Che Guevara.  Yet each well-wrought tale–and many are about Haiti–explores the love that guides the personal revolutionary act.  And whenever someone acts, whether Haitian or foreign,  in a country so on the edge, there is risk.  So the stories have tension.

First comes “Reve Haitien,” with its haunting inner-city dokte fey, “a kind of roving leaf doctor and cut-rate houngan who happened to have a grounding in Western medical science.”  This guy imposes a dangerous task on our do-gooder American narrator, who so loves him and his country that he willingly takes it on.  By the end, the reader has explored what is at the heart of Haitian art.

Next there ‘s  “Bouki and the Cocaine,” which, believe it or not, manages a loving tribute to the Haitian voodoo tradition in the context of the drug trade and its many temptations.  By the end, the reader has learned about family life, economics and religion in a small Haitian town.

After this, we have  “The Good Ones Are Already Taken,” about a white American couple dealing with the fact that the soldier husband, recently returned from Haiti, is possessed by a voodoo goddess.  By the end, the reader understands a whole lot about  both the marriage in question and how Erzulie kicks ass.

And finally the title story.  Che Guevara haunts the life of a spectral guy in Port au Prince, one of Che’s comrades-in-arms back in the day.  After Che the Haitian was almost elected Senator in the midst of Duvalier’s brutality because he called on Haitians to dance.  Dance instead of fight.  Dance.  By the end, the reader has met many who are forever haunted by Che.

Fountain’s beautifully-wrought stories about Haiti humanize people often depicted only as pitiful victims.  Each narrative insists –without slogans–that respect for the poor, their needs and their religion, are the primary imperatives.  Exquisite fiction focused on social justice.  For this lover of both social activism and literature?  Died and gone to heaven! 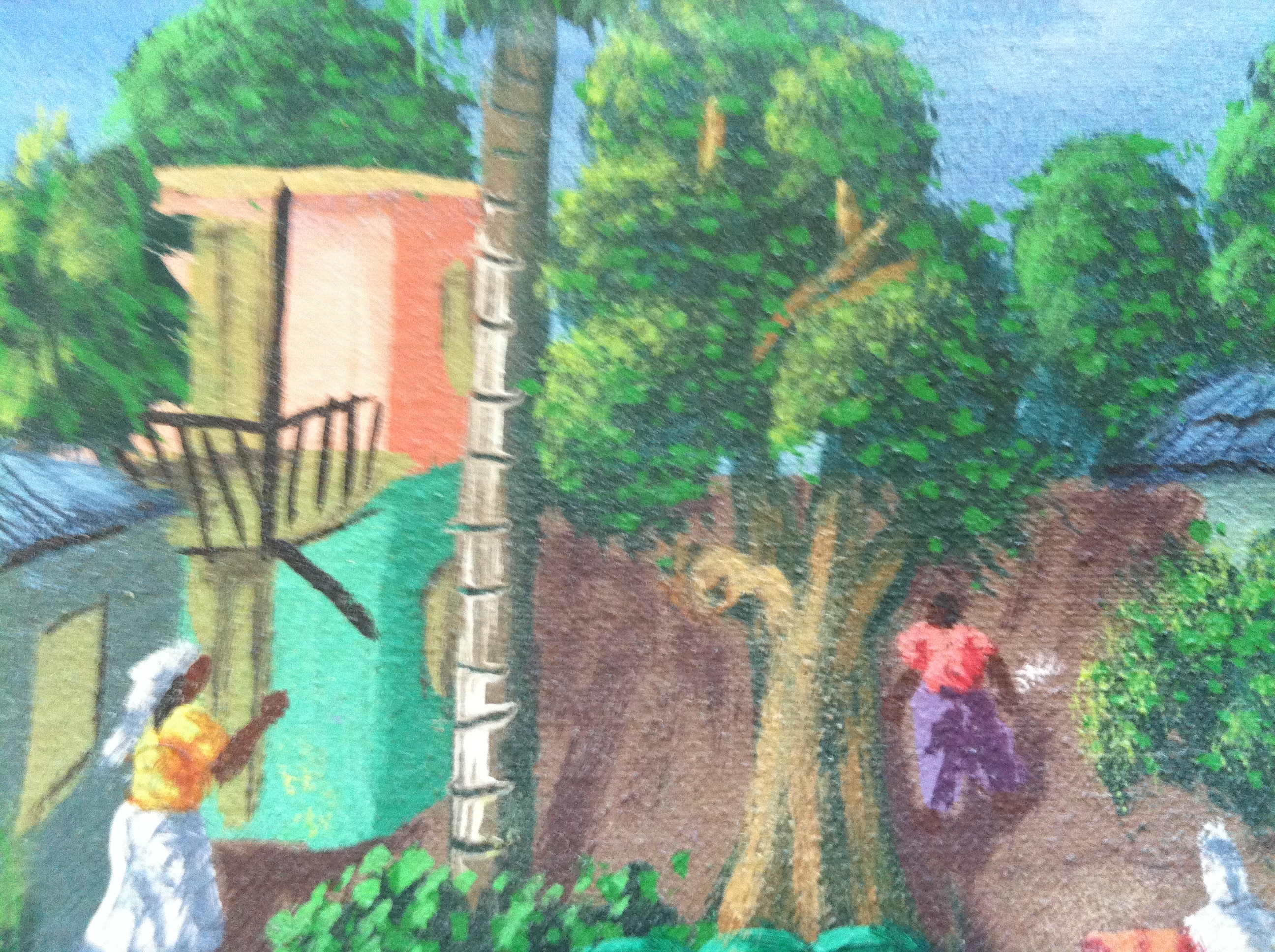 Detail from a Haitian Painting

Quiet as is kept, though, some prefer non-fiction.  For those interested in Haiti today, try  Paul Farmer‘s Haiti After the Earthquake.   Farmer–founder of Partners in Health with a lifelong commitment to FREE health care for all–lost friends and family (he is married to a Haitian woman) in the quake.  He  has toiled mightily in its wake to “build back better.”

His book is easy reading and offers a wealth of detail about the tragedy three years ago overlaid on the ongoing catastrophe that is the domination of the Haitian people by foreigners of all stripes.  His underlying thesis, though, is thrilling in its simplicity:

The NGO’s (10,000 and counting, just on  Haiti’s half of the island) need to be put to work for an effective central government or asked to leave the country.  Every project in Haiti must employ Haitian people in jobs with a living wage.  The functions of central government–clean water, effective sewage, sufficient food, adequate shelter, medical care–are essential and can be done by no other entity.

Who could argue?  And yet, people do, of course, when it comes to Haiti. 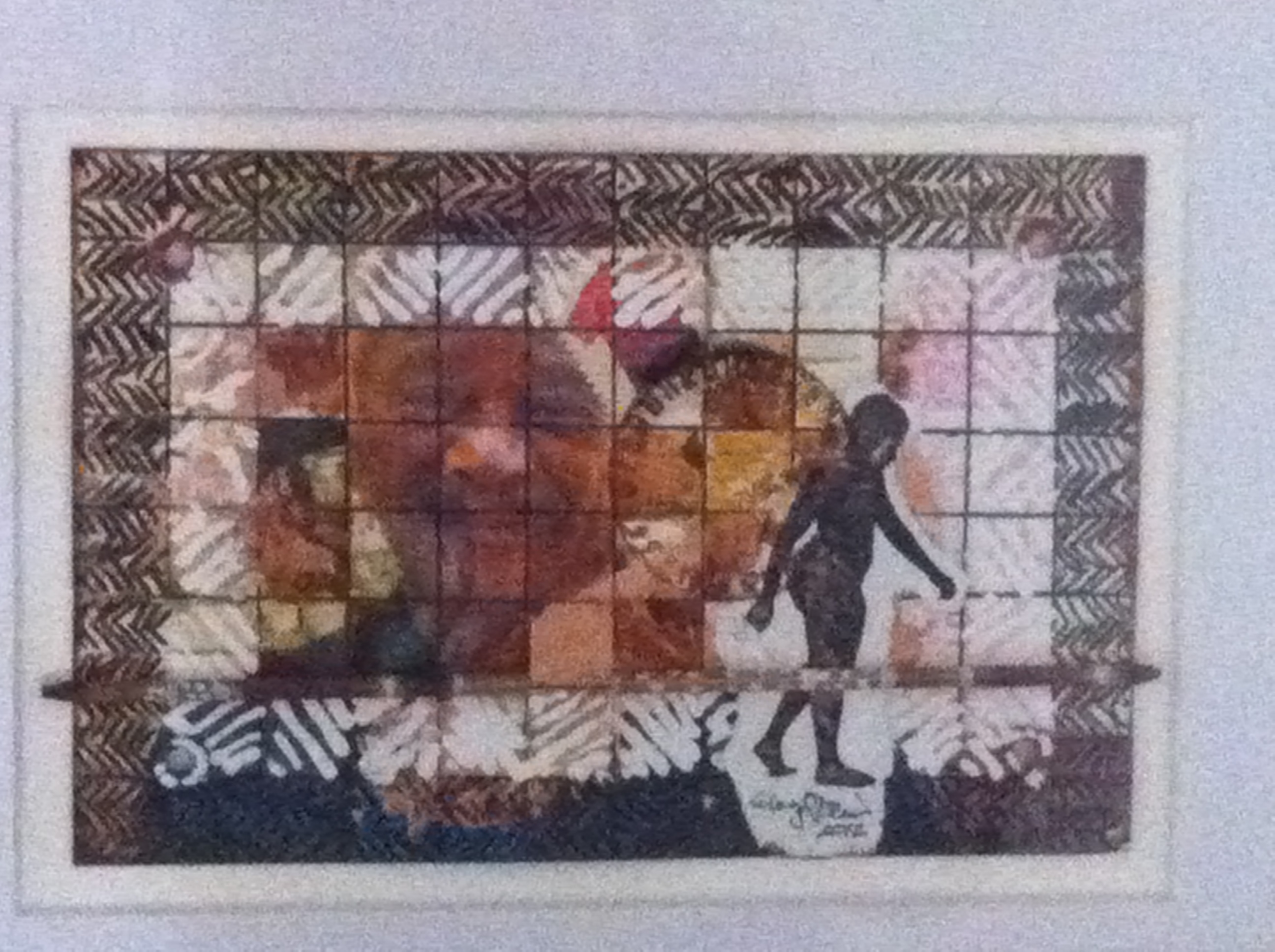 In both Fountain and Farmer, Jean Bertrand Aristide peeks out at the reader.  The former President has returned to his country at last, years after the 2004 American-aided coup, and lives with his family in Port Au Prince, funding and running UNIFA, a medical school for Haitian doctors and nurses.

Farmer understands the ordinary Haitians’ love for Aristide.  He has described how the people prepared for the President’s first inauguration in The Uses of Haiti, p. 162:

…Haiti bustled with people sweeping, shoveling, scraping, painting.  Neighborhood associations entered into friendly contests to see which area would be the most  well-decorated.  In Port-au-Prince, every square inch of road front was festooned in ribbons, flags, flowers, and palm branches.  Plastic soft-drink bottles, which had previously littered the entire republic, were painted red and blue and hung across the streets like Chinese lanterns.  Narrative murals, all of them political, covered the walls of the city.  The ditches lining the major roads leading to the capital had become veritable works of art:  cleaned of all debris, flattened and raked, they were then used as tableaux on which to write, with pastel-colored or white pebbles, a host of messages.  Most were for Aristide—“Titid, We Love You,” “Aristide, the Country is Behind You,” “Titid, Liberate Haiti”—but others were directed at the macoutes.  “The Rooster Pecks at the Guinea Flow,” was one popular phrase, usually accompanied by an image of Aristide’s mascot triumphing over that of Papa Doc.

Furthermore, Farmer knows that the coups that deposed Aristide not once, but twice, are part of the nefarious history of American/French/Canadian outside interference in what should be Haitian internal affairs, including outright Yankee occupation from 1915 to 1934.

BUT even Farmer tiptoes around an essential current issue:

Fanmi Lavalas, the “once-revered name of President Aristide’s party,”  (“Bouki and the Cocaine,”  p. 128)  is BARRED/FORBIDDEN/VERBOTEN  from participating in Haitian elections!  This would be like saying that the Democrats, or the Republicans, or both together, can’t participate in a U.S. election!!  And an election has just been postponed indefinitely, in fact,  after scads of people accompanied Aristide’s entourage through the streets when he was called into court.  That outpouring, that flooding of the masses into the streets, is Lavalas, which means “Wave” in Haitian Kreyol.

So yes, read about Haiti.  But also, when a chance comes along to add your name to something that says allow Lavalas to participate in the political life of the country, do it.

← You left-wing pinko rebels who question the established order…
→ The Immigrant Experience, inside and out…
Copyright © 2014–2018 Barbara Rhine.
Go Top