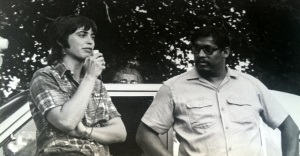 … and catch it on the big screen if you can.  Or Netflix.  Wherever.  This film is worth your effort.

There are clips of old newsreels that are fascinating in themselves, but it’s the made-up scenes that linger.

The stunning visuals evoke California’s San Joaquin Valley from decades ago.  Claptrap cars negotiate the perimeters of the fields on narrow semi-deserted pavements , where the viewer sees, between the rows, farm workers caked with dirt, scabbed and scratched, working.  Their children at their sides, working.  Everyone  almost hidden by the vines, working and scared to stop or talk with Cesar Chavez and his henchwoman Dolores Huerta, yet compelled to do so by the truth of what they are saying.

Cesar is quiet and compelling; his brother Richard a constant companion; his wife Helen a no-nonsense woman, whether on the home front or getting arrested; and Dolores a combination of effectiveness and arresting beauty.  John Malkovich as Bogdanivich provides a complex portrait of a Delano grower, an immigrant himself, but opposed to the UFW.

In one scene Bogdanovich brings cold water to the fields as a favor for the workers when he wants to turn them against Cesar.  Water during hard long hours under the scorching sun as a favor, not a right.

A mimeograph machine churns out leaflets, after a typewriter is used for the text.  UFW volunteers use pen and paper to help barely-literate workers apply through the credit union for loans. The growers’ wives, in their only substantive scene–like the segregationist white women of the Jim Crow South–manage to feel affronted when those with a different skin color simply gather.

Without the F(eminist) word being uttered, director Diego Luna demonstrates the seepage of cultural changes being wrought by the Sixties.  In Cesar’s life, his co-organizer Dolores, and at times his own wife Helen, call about as many shots as he does.

But the growers?  Even when, angry and frustrated, they slam doors in their wives’ faces, the women do their bidding.  Most compelling is the Mexican maid in Bogdanivich’s household, treated alternatively as invisible and a confidante.

In other words, women in the movement for social change were getting uppity, but the transformation had not yet spread to conventional white culture.  (And has it yet?)

Eventually the struggle moves away from the fields, to the grape boycott in the cities and overseas, where labor unity means the longshoremen won’t unload the boxes and leave the fruit to rot, forcing the growers–despite Reagan’s and Nixon’s support– finally to bargain and sign union contracts that benefit farm workers for the first time in American history.  All true.  All well done.

Yet the movie does have its inaccuracies and omissions.

Jack Holmes, who  plays Bobby Kennedy,  is a dead look-alike.  But Mark Moses, who plays Cesar’s mentor Fred Ross, actually looks more like Jerry Cohen than the guy who plays him.  That would be Wes Bentley, who does a hippy-dippy version that does not correspond to the UFW’s lead attorney in his youth.  (Full disclosure–Cohen was my boss when I was a UFW staff attorney from 1973-75)

Okay.  So verisimilitude in detail is most important to those like myself, with visceral memories of the UFW scene.

But Fred Ross should have been portrayed as the lifelong mentor he was for Cesar, instead of a petulant complainer in his one main scene.  And Jerry Cohen would have been more accurate as a colleague who worked shoulder-to-shoulder with Cesar to match legal strategy to what was happening in the fields.

The first grape grower to sign with the UFW was Lionel Steinberg, a Jew from Coachella, who did it early on.

As for Chavez himself, yes he was dedicated, yes he was serious, yes he fasted for nonviolence.  But what his portrayal lacked was that sly sense of mischievous humor that Cesar had during his rise and at the height of his influence.

After all, here was a man whom everyone in the UFW movement–even those who hadn’t yet met him–called by his first name.  You wanted to hug him when you finally saw him face-to-face.  He made you feel as if he was your best friend.

Until, that is, he took a stand.  One that made you work your ass off.  One  that demonstrated nerves made of steel.

Finally, the movie could have done so much more to convey the breadth and diversity of the UFW movement, which went far beyond the community of Mexican farm workers.

A careful viewer could glean the fact that the Filipinos initiated the 1965 strike, but nothing in the film indicated that their leader, Larry Itliong, had spent years organizing against brutal conditions that included a legal prohibition against Filipino workers either bringing their families to America or marrying non-Filipinos once here.  Consequently, the guys roomed together, and ultimately retired at Agbayani Village in what used to be UFW headquarters at Forty Acres near Delano, CA.

(The hordes of volunteers that came out from urban areas to work for the UFW movement knew these older men best for the delicious food they set out for whoever showed up.)

And where was Mack Lyons, organizer par extraordinaire of Florida citrus workers and a member of Cesar’s inner circle who happened to be black?

Philip Vera Cruz, the Filipino member of the Executive Board?

Of course you can’t include everyone.  But none of the film’s scenes, including the aerial survey of a crowd said to be 10,000 strong, captured the diversity of the Movement that sprang up in response to the UFW cry for justice for farm workers.  Anti-war activists, civil rights veterans, city religious congregations, union locals, counter-culture rebels, city Chicano groups, Brown Berets, Black Panthers, Gray Panthers–the list goes on.

Just one song could have made the point:

The movie’s ending with the historic collective bargaining agreement of 1967 is totally legit as far as I’m concerned, even if eventually, as Nathan Heller’s April 14, 2014, New Yorker article tells us, Cesar Chavez eventually turned inward to destructive effect.

But a lot more happened after the movie and before the implosion.

By 1970 the UFW got grape growers to accept union contracts and effectively organized most of that industry, claiming 50,000 dues- paying members.

In 1972 the UFW was finally accepted as a full member of the AFL-CIO.

In 1973 sweetheart deals between the growers and the Teamsters Union triggered a series of strikes that started in Coachella and rolled up California’s San Joaquin Valley . The AFL-CIO pledged full support and sent millions of dollars in aid. The Teamsters responded with crews of bikers and toughs hired to intimidate and attack strikers. Thousands of farm workers and supporters were jailed, and finally, two UFW strikers were killed on the picket line. This was the largest agricultural strike in California history.

1973-75 saw the international boycott against Gallo, at the time the biggest winery in the world.

And at long last, in 1975, due to the UFW’s sway in labor circles and in Sacramento, the California legislature enacted a framework for the farm workers’ right to organize into unions with basic protections like hiring halls and seniority rights.

Here is a list of the gains for those who work today in California’s fields, due to the effort of Cesar Chavez and his dedicated followers:

So, yes, to paraphrase the song:

The workers struggled, with valor and with strength, against the boss.

The people who joined the Mexicans included the Portuguese,  the Arabs, the Filipinos, and Americans of color.

Many put their faith in the Virgin of Guadalupe, to protect the poor.

Long live the cause for which we fight!

Long live the strike in the fields!

Without him none of this would have happened. 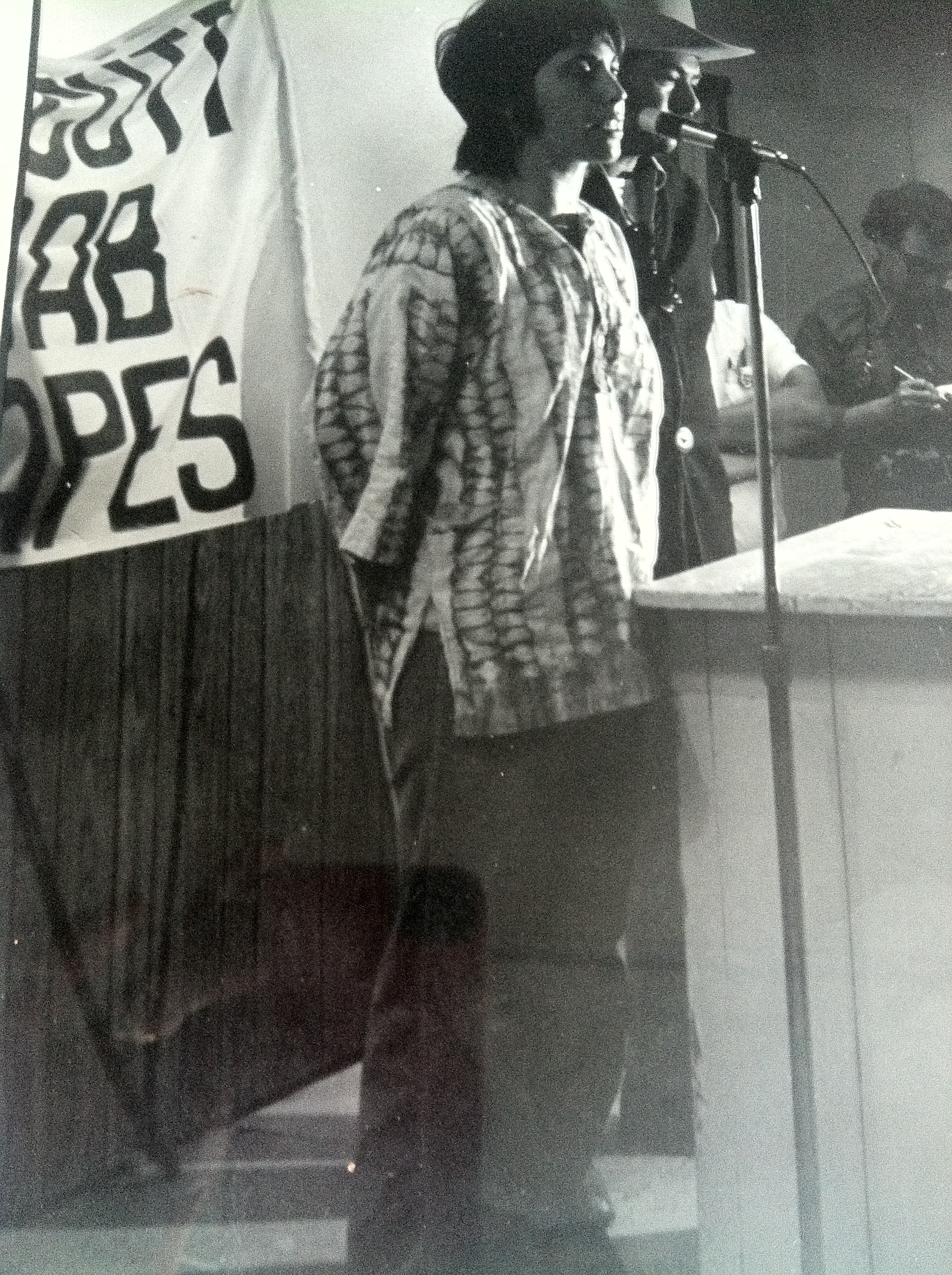