Before we get to the mountains, allow me a word or two about Swiss trains: Clean, comfy, and always on time. So the schedules give maybe five minutes to change trains. But it’s not always easy to find the new track on the signs. But people speak enough English to try to help. But sometimes they give the wrong information, so you should have looked at the signs more carefully. Then somehow you’re on the new train just before it rolls. So it works. But not without stress.

And any travel account has to mention food. Swiss food is fine. Not a particularly distinctive cuisine, but fine. At our hotel breakfast buffet (free with the room) there is a sign that requests guests to put no more on your plate than you will eat. Because the Swiss, relates the placard, believe it is wrong to waste food in a world where people go hungry. I’m from the era where parents emphasized starving children when they ordered you to eat your food, so I take this to heart, and I eat a lot.

Eventually, in a quiet restaurant at the Top of Europe (highest point of the continent that can be reached by train), relieved to escape the tourist hordes, I ask a waiter about this no-wasted-food rule, while I am debating what to order. Sure enough, he sincerely informs me that he hates to see food wasted in a world where so many don’t have enough. I am impressed with this compassion in a culture best known for precision and order, and vow to make the size of my eyes correlate with that of my stomach from now on.

But the real purpose of this account of the Swiss Alps is to describe the terrain in words. Here is the view from our hotel verandah:

The Glacier Visible from our Hotel Deck

The edges of two separate glacial landscapes seem to advance and retreat as I watch. Clouds, at times white and fluffy, at times gray and serious, sweep over and off the faces of the cliffs. Each glacier defines a distinct scene, tranquil but not still for long amidst the patterns of moving light and shade. Then a glacier, shrouded, is lost completely. Then the whole system is lit by a rose sunset glow, so that a solid rock face appears to be made out of a soft red ice.

One time in the middle of the night the sky is studded with diamond-like stars; the snow a soft luminescent blanket, pierced by the gigantic pyramids that are the mountains’ tips. Later a partial moon lends all this a soft glow, leaving nothing in sharp relief.

On the first day we stroll to a cable car from our room and immediately ascend hundreds of vertical feet to a high plateau. We walk and gape and chat with other tourists as we take in the fabulous view. We traipse across a high saddle to a cafeteria where my plate of tuna and raw veggies is a tremendous relief after the richness of Parisian repasts. 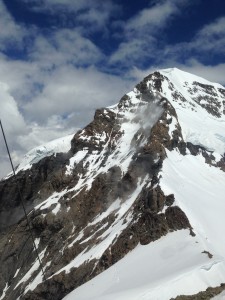 View from the Cable Car

The mountains garbed in glaciers—Vetterhorn, Schreckhorn, Eiger, Mōnch; and Jungfrau—parade around us, their towering visages clouded, then clear, then clouded again.

We hike down to Kleine Scheidigg, take the train back to Wengen, walk up the hill to our hotel, and every time I look up they are still there. Vistas, glaciers, sun and clouds.

As Ram Dass would say, “So what’s wrong with that?”  Nothing, Ram Dass.  Absolutely nothing.

On the second day we pay too much and get on the train to the Top of Europe, where there are HUGE ##s of people, as in elevator lines of ½-1 hour amidst family tour groups. And yet…

I decide to assert myself in order to circle every perimeter with no one between me and the view, and I am so determined that the people give way sooner or later. At one point I venture about 200 feet out onto the snow and ice.

It is a compressed mini-trek, complete with precarious footing and that sense of wonder as humanity falls away and the wilderness exerts its spell.

Always present. Always looming. Always more than we humans can conquer, with our cables and wires and trolleys and trains. The high cliffs and peaks and glaciers and waterfalls that spill down sheer surfaces for hundreds of feet.

This huge splendor that has spawned us all, that is where our atoms return to their star composites, that spreads from the oceans and the lowlands and the hills to the tips of the highest peaks. Out and out and out. Into the infinity of dark space and black holes our human brains cannot yet comprehend.

Next comes the day of the Lauterbrunnen valley walk, a long amble through the most beautiful valley I have ever seen—larger, wider, deeper than Yosemite. 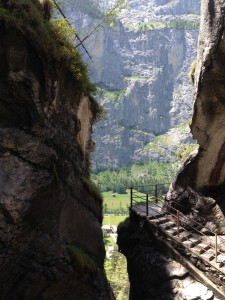 Lauterbrunnen Seen from a Staircase up the Cliff

We pay admission to see the Trümmel-Bach-Fälle, said to be falls that descend through rock. We enter an elevator and shoot up hundreds of feet into the dark.When it finally halts, one woman can’t make herself get off. I have to steel myself against claustrophobia to move forward into the darkened caverns inside the solid rock. 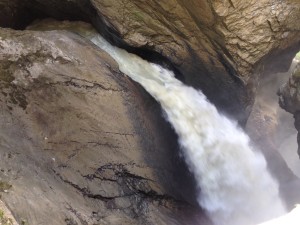 Water Pours Through Rock at Trümmel-Bach-Falle

Sound is everywhere as the waters crash and churn around twists in the stone. The surges seem powerful enough to accomplish anything, to take whatever course they want, but I had read the brochure. The theory of the water acting like a mill, to grind the rock into the shape of its flow, is now discredited. No. The waters did not form the rock. The rock formed the waters.

At the third or fourth station I look up through a hole at the sky and find that water droplets shoot off in all directions, tiny comets alive with motion, lit by the bright golden air.
We start back down an outside rock staircase, and I come to a railing where I pause to check out the roiling waters below. A foot or two above the churn is a horizontal rainbow that slides and moves and gyrates as if it’s alive! The spectrum ranges from a bright yellow chartreuse to a deep purple that throbs into black, and it lasts the length of the curved viewing platform. I cannot take my eyes off this, and I cannot remember seeing anything like it before.

I walk the rainbow’s whole length, return and start again before I realize that in one place it becomes double! In that part of the arc, an identical spectrum curves right above the first—or rather next to it, since all this is in a horizontal plane.

I pace the width of the railing over and over, just to see this miracle of dancing light and swaying droplets materialize out of the mist below me, reproduce into identical twins, return to a single entity, then disappear. Existent? Ephemeral? Each. Both.
I don’t need a god to see my miracles.

Our last full day we go, by train of course, to Interlaken Ost, below Lauterbrunnen. We rent bikes that are boosted by electric batteries when you move the dial, and set out to circle the lake.
The hills are steep, the lift miraculous. The route is a narrow road at times, crowded enough when a bus or truck goes by that I can’t stand it, and have to pull over. Other times it becomes a rutted path with a steep drop off to the left.

This part of the journey is arduous at best, scary at worst, but the lake is always beautiful. 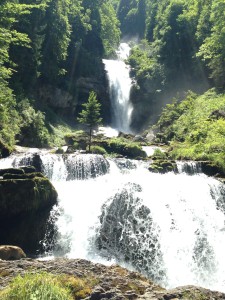 And then comes a fabulous waterfall; then lunch and a beer; then the ride back on the opposite side through several small towns; then the first train; then the transfer to Wengen; then another train; then the walk up the hill to our hotel. And then our view! By now this phrase has been written into my brain: