Getting there was a trip! On the literal level this involved four trains and a bus. There were razor-thin time margins between the first three trains, but we met them—hauling suitcases off and on with the alacrity of seasoned travelers. The bus from one train terminal to the next took off at once, so when we got there we suddenly had time. To wait for the next train, that is.

We had a snack and a talk with a young woman who wrote for a popular magazine. She had good politics, good values, and most important for this conversation, good English. When it was time to go, I told her I would come to the dining car to find her, but if we were to believe a guy who came through to sell cheapo items that involved lots of meat, this train—the longest so far, in our journey—had no such thing.

So I purchased a curved hot-dog-looking sausage with a weird soft deflated bun. He gave me no utensils, plastic or otherwise, so it all had to be scraped from the paper plate by hand. Delicious mustard and mayo, though, different from what you get in the U.S., which made it all worthwhile. Of course I never saw the writer again.

Oh well. The brief encounters that arrive unexpectedly and karom back into the universe—they are so memorable in the travel zone, and sometimes they even survive in the brain years later.

On the metaphorical level, as we departed the very well-organized Switzerland and headed into Austria, I couldn’t stop feeling the fact that so many–Jewish and otherwise–had died right around here in the recent historical past. By the time we were on the fourth train—the one that would actually get us to Salzburg, I was a little freaked out.

I didn’t want to look at the landscape backward, which was the way our seats faced. I transferred into a seat that faced forward, and tried to look as though it were mine, but I wasn’t happy there, either. Tired and distracted, I returned to my companion, rested my head on his shoulder, closed my eyes in order not to see anything at all, and tried to doze. 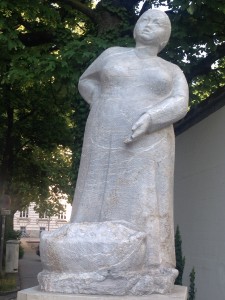 Oy vey–Why So Much Suffering?

The train traversed what seemed an endless series of middling mountain ranges, wheezing its way up, then down, then up some more. It sounded as if trolls, or maybe goblins, stoked the fires that moved us along inside some sort of dangerous wild animal, groaning the whole way.

My consciousness had moved from the mountains’ beauty to the long harsh winter to the even longer wars. Honestly, this felt like a waking nightmare.  Such a bloodstained terrain… 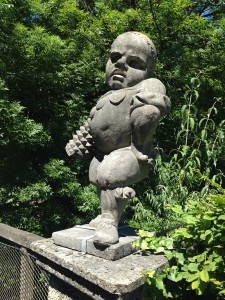 Once arrived, though, we made our way with ease to our hotel, ate and slept well, and enrolled in a city tour the next morning to begin our only full day before the next train to Prague. Our freestyle woman guide was knowledgeable and attractive and patient with our group. Heads turned as we traipsed behind her. The male leader of different tour could not get over his good fortune.

“This is another of our guides,” he crowed. “She was born in Italy!”

She humored him with a smile and marched us right on past, to a section of the Mirabell Gardens graced with a series of statues.  Statues of what? Why of dwarfs, of course.

Franz Anton Harrach, a prince and archbishop, had these made in 1715. Not your Disney Snow Whites, many were modeled after actual dwarfs who lived in the court and served as his entertainers. 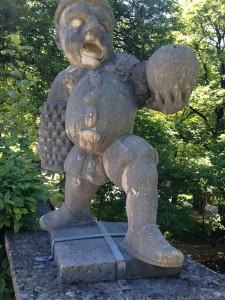 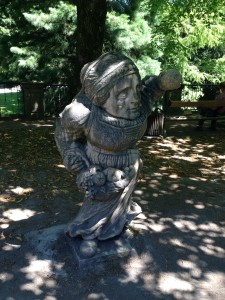 In the full light of a sunny day, my journey from dread had transformed into a bizarre fairy tale, like those of Grimm and Anderson I had loved so as a child.

This story’s magic reached its climax in the late afternoon, when we found ourselves in a round domed space, replete with golden angels on both sides of an ornate alter, for a concert that featured Chopin, Mozart, Fauré, Schubert, Kreisler, and a composer I had never heard of.

Next a gracious, composed Asian woman, old enough to be his mother, turned out, per the program, actually to be his mother. She ushered us in. A sole cello, propped on a chair, faced us, with no music stand in sight; a grand piano was to the left.

The two musicians took their places at the same time. The boy arranged his cello, closed his eyes, and began with the familiar Ave Maria by Bach-Gounod, without the singing. And after that came all the others.

I didn’t need the angels and the gold.  I closed my eyes, to settle in and listen.

The sound was full, rounded, seamless.  Curling, faultless, ambling at times, crisp at others. No missed notes. (And remember—no written notes at all for the cellist.) No rasps from the bow. No strained timing between the two musicians.  Mother and son seemed joined, still in one body.

And the unknown composer? YuYing Zehetmair, also our hostess, our pianist, our cellist’s mother. She played four opuses, piano only, lush and romantic, spectacular in their own right.

The whole thing was by turns a mélange of wild ecstasy and a nuanced outpouring of subtle emotion.  And finally an accomplishment of precision that mystified me.  How could this perfection even be possible in our flawed human community?  Especially for our odd young cellist, who did it all without a sheet of music?

Nature had offered me the secular sacred in the Swiss Alps, and now the term expanded to include music and dwarfs.  Oh, and also a modern statue of three nude nonsexualized youths who inhabit their own reality, play their own simple instruments. . .