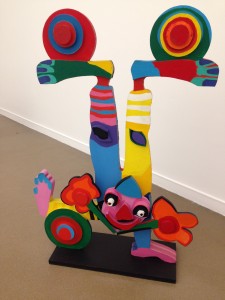 Jet-lagged of course, and the weather is unexpectedly hot and humid for early June. Our apartment is in an ancient building organized around an outside courtyard, with a modern elevator, encased in plexiglass and big enough for two, three if squeezed. During our ascent to the fifth floor we spy old wooden stairs, strollers, doors, conversations,  and then by some miracle after a twelve-hour flight we and our luggage are in. It’s a small place, but with three bedrooms, a narrow kitchen, two baths, one toilet, living room, dining room—everything the five of us, all friends, will need.

We are on the Left Bank, Rue St. Placide, near brasséries that turn into serious restaurants the closer you walk to the Jardin du Luxembourg.

Ah, Luxembourg, with its sensuous statues of unclothed Greek gods. 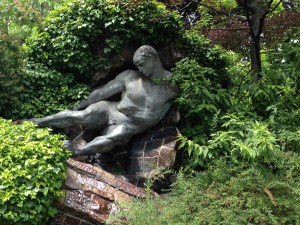 Lounging in the Jardin du Luxembourg

The thwack of tennis balls. The office party where everyone, still in business suits, is throwing boules. The chairs strewn about with people lounging and reading actual books…do you really let yourself appreciate how much relief trees and grass and flowers and shade offer for a hot day? Yes, at least while you are on vacation in Paris!

Coffee at the corner is immediately delicious. A few French words float into consciousness. Passersby are thin and casual; stylish clothes are displayed in each shop window. Intersections are a strange combo of circular and angular, so it’s reassuring that nearby there is a news kiosk with the International Edition of the NYT in English. I date myself immediately by inquiring after the Herald Tribune, which has been out of existence for, oh, maybe twenty years?

The evening brings cool; the strolling eventually lands us up in a restaurant with soufflés of light and air with a bit of egg and spice thrown in. And wine, of course–wonderful wine that’s not even that expensive.

After that we pass out, but luckily it’s when we get back to our place. The next morning it’s time to try the brassérie at the left end of our street. I order their “American breakfast,” which is delicious, as usual, and includes no fewer than four eggs. Only later do I realize that in the first twelve hours I have consumed six eggs, or seven depending on how many were in the soufflé!

One of us is a foodie, and he stocks the place with breads, cheeses, meats, fruits, cereal, everything we could need or want. Plus he cooks the best meal ever while we are there—fish stew, lamb shanks, huge artichoke, salad, pasta, good wine, on and on and even this list perhaps is a combo of the week we are there, because the food and the wine and the sparkling water and the coffee out and the tea in all become a constant comforting stream, with no beginning or end. I’ll be lucky if I get through this trip without a heart attack . . .

So you know how when you travel, the present trip is the most real and all the other journeys from your past are the deepest memories? Then when you get back, you wonder—how did you spend all that time? Well, the answer in Paris, after eating and drinking, is that we went to museums.

On the first full day it’s easy to make it to Jardin du Luxembourg again, where the Musée du Luxembourg has an exhibit that’s all Camille Pissarro.  To my surprise, since I’ve barely noticed him all the other times I’ve seen his work, I like him.  To my further surprise, he had anarchist leanings.  Maybe that’s why his work has love of the countryside first, the peasants next, and also the women and children in his life, all painted with respect.

On the second day we find our way through a maze of streets and come out at the Seine, which was what we hoped for but had begun not to expect. We cross a bridge far enough to sit, stare at Notre Dame, and listen to accordion music. We stroll along the river by weathered wooden structures that exhibit wares old enough to match, from whatnots like egg cups to black and white postcards to posters of jazz artists from the fifties. We pick a brassérie that fronts the parallel road, which unromantically bristles cars and fumes and shouting drivers. Nonetheless, all food in Paris is blessed, and my croque monsieur fairly drips with its cheese and ham.

Next it’s on to the Musée D’Orsay and, after the obligatory stop in the Van Gogh (which rhymes with “cough,” I later discover in Amsterdam), we head straight for the Impressionists.

I have always liked them in the past, but perversely now I am quickly irritated with the male (which is to say just about all) Impressionists. Maybe it’s Trump and his pussy-snatching that makes me aware of Toulouse-Lautrec and his dancing girls; Degas and his ballet girls; girls, girls, girls, all for the delectation of the artist and his male friends.

I search out Renoir, whom I thought corny in my youth but grew to love more with each decade, and yes, I still love him. But then, just as I remember that years ago I first had this adverse reaction at a Chicago Art Institute Matisse exhibit with walls and walls of odalisques (French version of Turkish word for courtesan), I stumble on a Renoir odalisque. The traitor!

Of course here is the trouble with generalizations. Later in Amsterdam I run into a Matisse odalisque that I like. Why? She seems like a real person, not his fantasy desire. 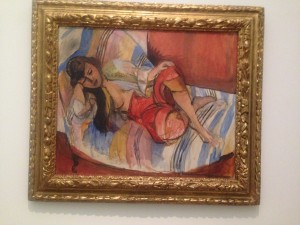 Next at the D’Orsay I find Berthe Morisot and Mary Cassatt, two of only three famous women impressionists. They both do women and children who are real people for sure. So by the end I am happy. 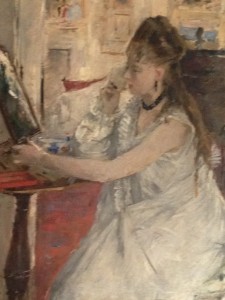 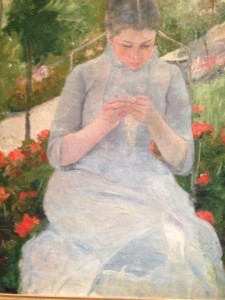 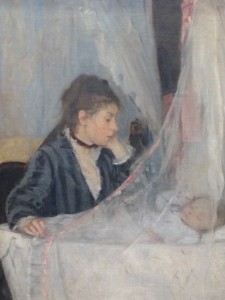 And the third day is for Musée d’Arte Moderne de la Ville de Paris, on Boulevard Woodrow Wilson? Who’s ever even heard of this one? Our friend Herb, that’s who.  And after all, it’s time to go beyond impressionism, now way over a century ago.  But when I get there I am back to noticing that the stories-high color triptych of French history, on all four sides of the atrium entrance, does not include a single woman. Not even Marie Antoinette? Joan of Arc? Simone de Beauvoir?

I wander several rooms of Karel Appel, Dutch abstract expressionist born in 1921. His women are compelling, though I am not certain he likes them much. And a series of wooden sculptures are so playful that I have to snap pix for the grandkids. 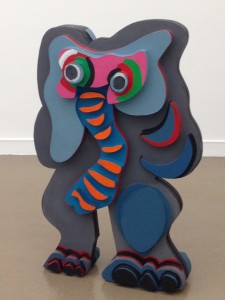 Finally there is Paul Armand Gette, a sculptor/photographer born in Lyon in 1926. Okay, so Gette has a portrait of a woman’s lip-ringed mouth so large that textured skin gives way to smooth lips gives way to a dark cavern framed by white teeth where everything swims in saliva. Since this is how we are, male and female alike, I am fascinated.

After this is Gette’s centerpiece: a photo series Le plage…été 1973, and these pix of the young girl on the beach, many just fragments of her body, but all in a bathing suit, are appealing. He snaps a shoulder and a budding breast, her butt with its own cleavage, her legs going up into her crotch, and he claims this is all okay because he has her permission. Really? Somewhere between thirteen and sixteen, she does not know yet (we hope) what the world will do with this information. Isn’t this really an excuse for a bit of pedophilia?

OMG, how could I almost forget to mention the French Open? Roland Garros! The red clay! A gauntlet of security checks, followed by coffee and croissants and fruit before we even got to the courts. 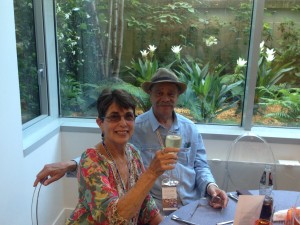 Hanging Out at the French Open 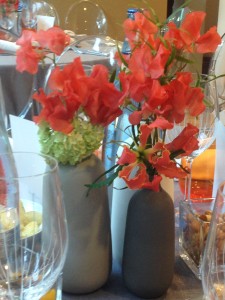 Flowers at the French Open

There were my elders—Navratilova, Davenport, Austin, Clijsters—playing an intense doubles final. There were the male equivalents, (less well-known, at least to me) cavorting about by literally running around the net during one of the points, joined even by a ball girl. Lunch, champagne, instructions on how to sneak beer or wine into the stands. 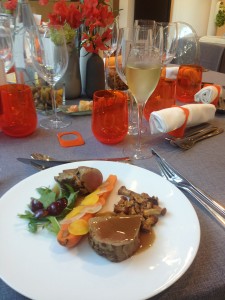 Food at the French Open

All this before the women’s singles final. Halep (Simona, the fans chant! Simona!) v. Ostapenko (Jelena! Jelena!) They pound through points that are crazy intense on what is supposed to be the slowest surface for tennis.

All this is capped off by the men’s doubles final—African American Donald Young and his Mexican partner (Mexico! Mexico!) who lose after a good solid three sets.

We’ve had such a good time that for an instant we actually want to buy a scalper’s tix for the men’s final the next day. A mere $600+ each the guy informs us, and he means it. If the seats exist, that is. On to Switzerland. (Mountain Alps! Mountain Alps!)